How would we feel if Shakespeare was banned, there was no Christmas and no Theatres?  Well that is how life was when Charles I’s head rolled, and the Puritan’s took over!

Being a fan of renaissance period plays, my interest was piqued after seeing ‘Read not Dead’ plays at the Globe Theatre and ‘Misfortunes of Arthur’ which was written in 1587 and last performed for Elizabeth I.  Owle Schreame have delved into the country’s theatrical past and helped to rescue some of the history that we did not even know was there.  In 1642 (on repeat in our case today – you had to be there) when theatres were outlawed, actors either had to find some other way to earn money or if they had no other trade, they could just press on with acting, as an outlaw. 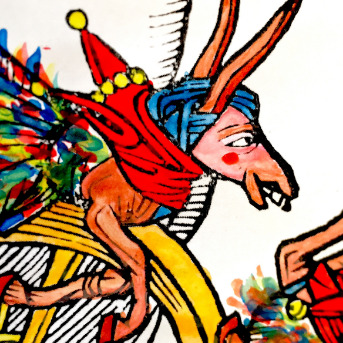 As there were no theatre’s they were pushed into small venues such as pubs and would look a little like small Edinburgh Fringe shows are today!  There are around 30 of these DROLLs as they are called with three of these having a direct connection to Shakespearean plays.  Today Owle Schreame performed ‘A Midsummer Night’s DROLL’.

How do I explain a DROLL?  It’s like ‘Men Behaving Badly’ (women allowed) doing Shakespeare or equivalent, whilst singing rowdy folk songs.  I can promise you it is all that and more.

The show winds its way loosely through the story of A Midsummer Night’s Dream with the cast playing multiple roles.  From the moment the play began we laughed and laughed and laughed - not just chuckles, these were real tears!  To add to the merriment, there was a guest invited to play the part of ‘Wall’.  For those who do not know the story, a play is being staged by the theatre company in the story and Thisbe and Pyramus want to kiss through a gap in the wall, but the wall is being played by an actor.  I will leave it to your imaginations to decide where the gap is!

The Droll is not polished Shakespeare with posh costumes and clipped RP accents.  This is performed how it was in the renaissance period when to own theatrical costumes meant the threat of being arrested and there was no theatre funding, so hats were passed around the crowd for payment.

Even so, the energetic, vibrant performances from all members of the company today, meant that the hour passed far too swiftly.  Owle Schreame have seen a gap in the crowded Shakespeare market and offer a part of history (which satisfies the theatre historians), whilst giving us the Shakespeare that we love in a fun and sweaty, exciting awesomeness.  I hope to see them perform different DROLLs in future and audiences should make sure they see them once as I assure you, you will want to see them again and again!

To book tickets go to https://tickets.edfringe.com/whats-on/midsummer-night-s-droll  They perform at Gilded Balloon Teviot and their show runs from 31st July 2019 to 26th August 2019.