It’s been a two-year journey from The Lyceum Studio - via hit runs at The Fringe and Soho Playhouse in New York - to The Lyceum Main Stage for James Ley’s sparkling play. It’s a brilliant, true story: This bookshop did exist (from 1982 – 1987), the brave founders Sigrid Neilson and Bob Orr are real. Broughton, Forth streets and the surrounding area still carry traces of the radical bohemian flavour and the building on Princes Street where the famous Fire Island Club was, still stands. Although it’s now a Waterstones. Love Song to Lavender Menace tourist tours might rival Trainspotting ones if the optioned film succeeds…

One could call it a Love Song – well, a ‘song’ - to 80’s Edinburgh, or even the rest of the UK; despite the comedy and hedonistic references, the early 80’s was a darker time to be gay. There were few places one could avoid the Stanley-wielding Casuals, truncheon-carrying Police or Victorian-era bullies masquerading as judges. In Edinburgh there was the Fire Island Club at nights or this corner of the city during the daytime. 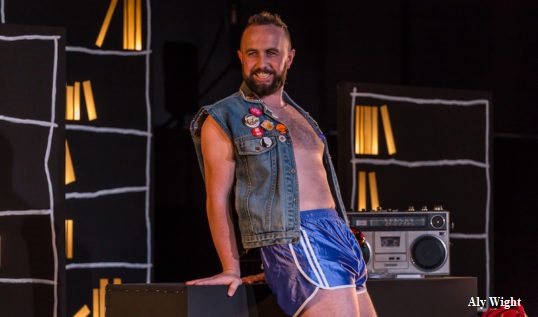 Like-minded people and the contents of the books available by Rita Mae Brown, Ursula Le Guin, James Baldwin, Jeanette Winterson et al would’ve reduced the sense of isolation for many waking up to their true sexuality.

So, Glen (Matthew McVarish) and Lewis (Pierce Reid) are determined to present an ‘homage’ to the founders on the night before the bookshop sadly closes for good but find themselves distracted and interrupted by memories, music, and more. They’re a balanced double-act, Lewis the flamboyant, restless idealist and Glen the more down-to-earth fall guy, who does, however, do a fine line in impersonations. The funniest of these is Closet Copper regularly finding excuses to ‘check in’ on the Fire Island Club, this uniformed hunk becoming the subject of Glen’s – alleged - yearning from afar. The actors effortlessly deliver a script that veers realistically from run-of-the-mill to comedy (the life-size papier mache orange anecdote) to pathos (the ghostly figure of the married family man moving furtively around the city, struggling to deal with a lifetime of denial), poetry (Debden’s photocopier machine upstairs) and gravitas (Lord Halsbury’s shocking, withering and reprehensible pre-Section 28 speech from 1986. Google it.). The biggest compliment one can pay the Director (Ros Philips) is that it didn’t look directed; the actors seemed natural. It’s also propelled by some fine physical acting, ranging from an hilarious photocopier impression to an indulgent use of some parcel tape and some moves imported straight from the Fire Island dancefloor.

Not to mention some unexpected flying books.

The set design (Mamoru Iriguchi) worked subtly; six square/rectangular black shapes behind the shop’s counter cleverly lit to resemble sparsely populated bookshelves. As the story moves on some of the books ‘disappear’, the shapes eventually representing austere, imposing Victorian tenements; a physical manifestation of the oppressive nature of society towards the LBGT community?

The poignant, understated thread throughout is the ‘are they/were they/will they/won’t they?’ aspect of Glen and Lewis’s relationship. If you want to find out, go see it.