Presented as part of The Greater Manchester Fringe Festival, this is a slightly reworked version of the play presented earlier this year at Salford Arts Theatre, by Grand Dame Theatre Company.

I have to admit that I had my misgivings. After reading the synopsis, and realising that it was a farcical comedy, I really was not at all certain it was going to be my cup of tea; however, as the saying goes, you had me with 'hello'.

Coping amazingly well with such a tiny stage with only one entrance through the audience, and performing a script which relies heavily on split-second timing of not just lines and moves but also LX effects (in a Fringe venue with the most basic and minimum of lamps), you actually had me laughing out loud - several times- and this is something I NEVER do! I even surprised myself in this regard. 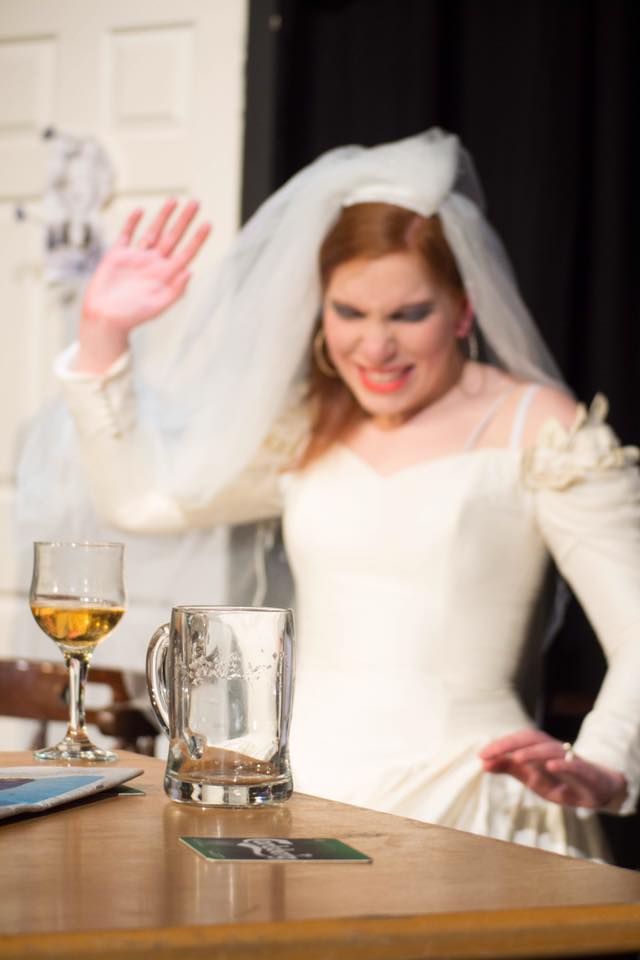 It is full credit first of all to Tess Humphrey who wrote this play - apparently because the company couldn't get the Rights for Blithe Spirit! Well I'm extremely glad they couldn't. Although the script offers no real surprises in terms of plot development, I think that is one of the joys of the play. You are able to all the time be one step ahead of the cast and so there is pleasure to be taken in knowing before they do and realising you were right. It is not a pretentious script in any way. It is solid and down to earth with some of the funniest lines I have heard in a play for a long time. The play has everything; bucket-loads of humour, farce, pathos, tenderness, tragedy, and some really quite serious moments which make you question the nature of mankind and our own egocentricities and motives. I think for me though the most refreshing thing about this play is that it simply turns the LGBT debate on its head. If I am completely honest then I am just a little sick of pro-gay plays appearing on the Fringe scene doing nothing but tub-thumping their cause and getting the backs up of those not of their persuasion. This had a rather different and clever approach to the subject matter, and one which could in no way be thought of as offensive to any member of any community. I would have liked to have seen Wendy's partner though. Her absence was both conspicuous and unexplained.

The storyline - in a nutshell - revolves around the oldest (and worst ) pub in The Gay Village in Manchester. One of the rooms is lacking to the tune of one outside wall, whilst mice roam freely, and the electrics are on the blink. The Public Health Inspector makes his visit and gives them 28 days to rectify their 40-odd defaults until, in a desperate attempt to try and stay open, mention is made of the resident 'ghost'. The Health In-spectre (sorry!) now likes this idea and because he is a firm believer advertises this and suddenly the pub is busy once again and they attract media interest. Things spiral out of control (as they tend to do in farces), but all ends happily (as they tend to do in farces).

The second person responsible for making this play such a hit, is director Sam Hart. This play is, in many ways a parody, and this means that the characters need to be real, but just a little over-the-top, but still believable. There is a very fine line between believability and parodying the parody, and Hart kept his characters flirting with that border-line all the time, but never crossing it. I am not going to say that the play was flawless; there were a couple of 'eggy' moments, but in the main, and considering the space, this was really quite excellent directing.

Without a programme I am a little lost now in trying to credit actors. These are the third group of people responsible for making this play so laugh-out-loud funny. However, since all the cast were so well chosen and played superbly, being at one and the same time both people you know and can relate to in real life and being people you purposefully avoid in real life... their grotesqueness, their shallowness, their materialistic nature, their overt brashness, or whatever other negative quality or label you would like to place upon them... it is all there, and yet they are all so very true-to-life and funny and worked so well together. My only casting consideration would be to say that the actress playing the protagonist pub landlady, Wendy, was not old enough.

This is Fringe Theatre at its best. A little rough around the edges (with a painted black sponge on top of a stick to act as a sound boom prop!) But a solid team of professionals working towards the same goal - to make the best theatre possible with minimal resources, and to promote themselves in order to hopefully catapult themselves further up the PA Ladder!