After winning the award for Best Spoken Word in last year's Greater Manchester Fringe Festival, this was Magpie Man Theatre's very bold and brave follow-up; which, using elements of contemporary dance, physical theatre and hard-hitting dialogue, compels the audience to watch, listen to, and perhaps even challenge their own perceptions or preconceptions on issues of contentment and acceptance. Contentment with and acceptance of our own body... its shape, size, gender, sexuality. And also contentment with and acceptance of how others view our body and how we view others'.

There is no doubt at all that this is powerful and emotive writing. Written from the heart, with possibly some of what I witnessed this evening being semi-autobiographical. It somehow felt too real not to be.

It is not easy theatre, and it is not going to make you leave whistling the theme tune and skipping down the street. No, this is theatre which deliberately challenges you and you have to work quite hard to both understand and emote. It is the kind of theatre that you need to leave and sit in a dark corner on your own for a couple of hours coming to terms with and finding out how you yourself reacted to and how comfortable you felt with what you have witnessed. 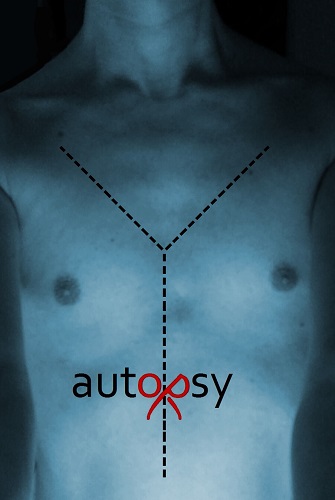 For this and more I say bravo ten thousand times for bringing such theatre to the Fringe in Greater Manchester. Theatre has become, over the past decade or so, very comfy and easy. Bums on seats and Facebook Likes have become much more important than challenging audiences and daring to stand up and be counted. Theatre has become 'safe'. Unchallenging, unprovocative and 'nice' - everything which Magpie Man's Autopsy wasn't. Huge kudos for this. Not just Fringe, but theatre in general needs more pieces which don't 'fit the mould' and deliberately provoke the audience's emotions.

Autopsy [although I really would prefer it if it lost the Americanism and had the British English title of Post Mortem], was a series of 10 un-connected 'sketches' or 'stories'., and performed on a bare stage by 7 young and talented actors / actresses wearing Drama School Rehearsal Blacks which gave the whole event a rather experimental feel to it, but not a contemporary one. Performances such as this and costumed this way were very daring, new-wave and even shocking 100 years ago. The exploratory world of experimental theatre in the 1920s used similar costumes, and used dance and physicality to explore themes which were considered far too risque and taboo to speak about. Even some of the choreography this evening, especially the final piece, felt stylistically it belonged more to that era than to the 21st century.

For me, the first half of the evening worked better than the second. It all started with a very powerful and heart-felt plea - a monologue with interesting and striking visual movement, followed by a blank stage bathed in red whilst we listened to voices only. This was followed by an excellent parody about an American Corporation selling you one hour of living the life you've always dreamed of in the body you've always wanted. Cleverly written. These three vignettes (if you can call them that) all seemed far more connected with the play's title and were all much more inter-connected than those which followed. I really enjoyed the last piece of the first half, using small prop items, even cardboard cut-outs of clouds and sun. The humour here was used to excellent effect. However, the further into the evening we went, the more diffused and confusing it became, with my not understanding the final piece at all. Visually interesting, but unexplained. Although this final piece explored to good effect the Rule of 3. Sadly, this rule had already been explored several times before in other sketches and so in what maybe should have been a huge revelation and perhaps even shocking finale - we all already knew that the third time would be different.

Apparently I found out after the play had ended that each of the ten items in this evening's production all had individual titles. I feel knowing these titles prior to watching may well have helped in our understanding. Unfortunately, yet again, there was no programme, and so cast names and creatives involved will have to go uncredited. (Although I do know that it was written and directed by Christopher Bowles.) However, with a programme, some little info on each piece could have been divulged; even it is was only the title of the piece, in order to help the audience just a little in some of the more obscure of this evening's offerings.

Yes, some things may challenge you, you may be disgusted by them, define yourself by them or empathise with them. But however you felt before you watched this play will not be the same when you leave. And that's brilliant; just as it should be. Even if one or two of the playlets weren't to your liking or even perhaps understandable, this is theatre to be reckoned with. They have laid down the gauntlet, and Manchester theatre-goers need to pick it up and accept their challenge. You won't be disappointed.