King Lear is arguably one of Shakespeare’s most well-known plays. As someone that studied the text at school, there is so much to play with in this fantastic play. Unfortunately this version by PurpleCoat Productions fails to hit the mark.

This production is produced, conceived and directed by Karl Falconer, who also manages to play the roles of The Fool and Gloucester. While I do admire his ambition, I feel that the multi-tasking led him to not executing any of these roles particularly well.

The entire production had a very cheap feel to it. If this were a normal fringe play I would overlook it. However, this production has received Arts Council funding, yet from watching the play I would never have thought that. The direction is quite poor too. At the beginning Coredlia (Emily Heeney) hugs her sisters Goneril (Natasha Ryan) and Regan (Evangeline Murphy King) when she banished by Lear. This does not match with the dialogue and therefore was a poor decision. Falconer tries to win the audience round by playing for laughs in his role as The Fool. He even adds in his own lines. This is a massive no-no for me. Shakespeare work is so strong on its own, it doesn’t need to be tampered with. 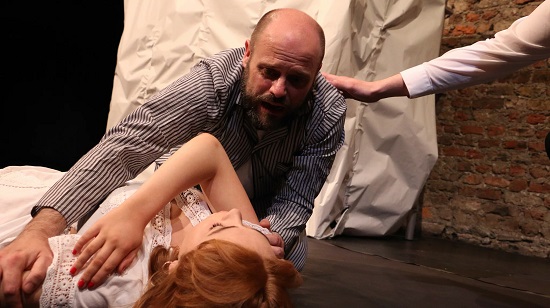 Paul Carmichael plays the role of King Lear. He is probably the strongest actor in the cast and has good stage presence. However, he did have a tendency to shout quite a lot, even when it wasn’t needed.

One thing that left me completely baffled by this production is that the Duke of Cornwall is a now a female character played by Kimberley Lasi. She is married to Regan and are a same-sex couple. While this is certainly a new way of exploring Shakespeare, it just simply doesn’t work because as the story progresses Regan seems to have a personality transplant to make her character fit with the original writing.

However, the main aspect that failed this production was the lighting. For the majority of the show the audience was more lit than the stage. It looks like PurpleCoat Productions possibly have bother with a technical rehearsal at this venue. However, the actors should have had the sense to walk into the spotlight, rather than perform in an unlit space.

While I admire this youthful cast for taking on one of the most well-known plays of all time, the lack of depth to this piece creates massive holes in the production. I would suggest that Purplecoat revisit all aspects of the production, if they are to continue with King Lear.