The winners of ‘Best Comedy Show’ at last year’s fringe festival are back with a new show called ‘Journeys’. It is exactly what it says on the tin - a fast paced, physical comedy show. Using a limited amount of props, the four actors go on journeys around the globe.

Upon entering the theatre the atmosphere was a bit dead, due to a small audience. There could have perhaps been some music playing while waiting for the show to start as it felt a bit awkward.

The first scene is absolutely magical, the four actors enter with suitcases and chairs to embark on their journeys. The choreography here was excellent, it was a shame it had to come to an end.

First up was a whistle stop tour to France. This scene is entirely in basic French, so it is very easy to know what is happening. The actors also do a great job of taking on the different characters. 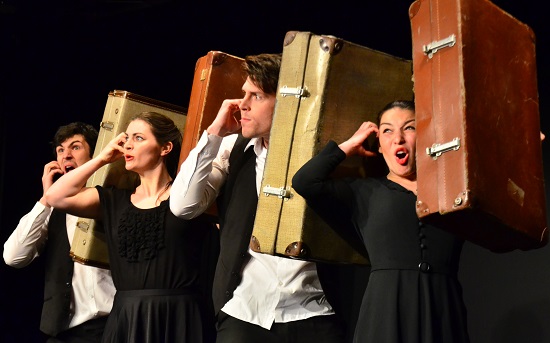 The play then moves to Spain. For me, while still entertaining this isn’t as strong as their French scene, mainly because only one of the female actors could do a convincing Spanish accent. However, they may have been the intention.

Overall this is a great show with fantastic physical theatre. I didn’t stop smiling from the moment I entered the theatre. It’s fantastic to see an ensemble that work so well together and each make up a vital part of the team.