2016 marks 400 years since Shakespeare passed away. To mark the anniversary his work has been performed quite extensively this year. Therefore, it’s going to take something unique to make one performance stand out. Unfortunately Truly Outrageous Productions take on Hamlet didn’t hit the mark for me.

The biggest issue I had with this production is that the scenes do not follow the order in the original text. The iconic ‘to be or not to be’ soliloquy is no longer a soliloquy and is a moment shared with Horatio (Alex Herod). It’s also moved towards the end of the play when he has killed Laertes (Andy Pilkington). 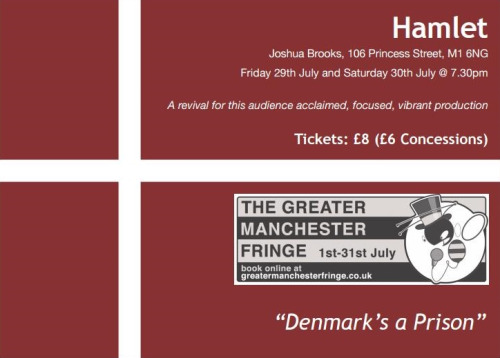 Also noticeably missing from this production was Ophelia going mad. Especially my personal favourite from Act 4, Scene 5. Instead we got an Ophelia (Rebecca Derrick) that was more resemblant of a stroppy teenager.

There was a lot of noise coming from the bar upstairs during the performance. This was very distracting and it diluted the intimacy of some of the scenes. Especially when someone opened the door during Claudius’ (Franklyn Jacks) monologue.

In general the acting lacked energy, there was little to no variation throughout. Usually there is always a standout performer in a play. However, in this production there wasn’t, all were average at best. Hamlet (Andy Avery) paced around the stage without any clear intention.

The blocking of scenes was also an issue. The layout of the venue is in a thrust style, as someone who was sitting on the side I missed quite a bit of the action as the actors were blocking my view of them.

Overall this production fell flat for me. There was very little redeeming qualities of the play. I do admire that director (Anne Davies) was trying to do something different, but for me the scenes not being in order is such a massive issue that it put me off from the beginning.