One of the hardest things in comedy must be to play to an audience that numbers less than a dozen. Sadly, tonight at 53Two Katharine Ferns did just that as she brought he latest show “In Stitches” to the Greater Manchester Fringe. It seems 7pm on a Friday night isn’t the most popular time of the week for comedy, however those who did turn up were treated to one of the most moving, witty and sincere performances of this year’s Fringe.

Ferns describes her show as “a comedic storytelling journey about domestic violence, mental illness with some feminism for comic relief.” The show was changed from its original path on the 21st April 2016 when one of her idols Prince passed away in Carver County, Minneapolis and it now revolves around the domestic abuse she suffered during a relationship and the effects that time has had on her life since then. 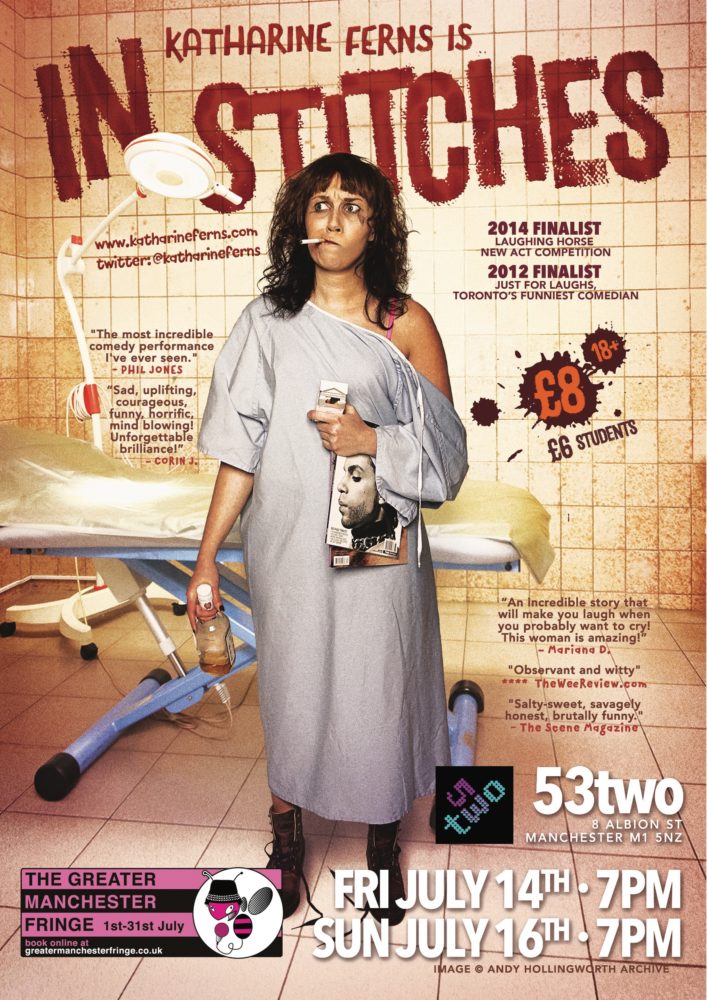 Make no mistake, this is a very powerful and emotional story told by Ferns which had me transfixed from the moment she walked on stage, for me the fact the audience was so small seemed to make this all the more personal. Countless women everyday are subjected to abuse in relationships and with many staying silent out of fear and ‘love’ for their partners it is rare to hear first-hand recollections of such despicable acts.

The ability to turn moments of absolute fear and subsequent pain into comedy gains my total respect and Ferns does this superbly. Brutally honest from the start this show just goes to prove you can make comedy out of tragedy. There are some wonderful one-line jokes throughout this 1 hour performance, many when you’d least expect them, and there is a small section on kittens to lighten the evening’s proceedings.

Ferns is a mistress of her art and someone I will be making a point of seeing again when she next returns to Manchester. At the end of the show you just want to approach her in the bar and give her a big hug such is the impact she has with her story telling. I urge anyone in town on Sunday to catch this show as it is repeated at 53Two at 7pm.