The Lion, The Witch and The Wardrobe - Arts Theatre, Salford

Although in Narnia it is always winter but never Christmas, we were treated to a beautiful gift on 20th July at the Salford Arts Theatre. A beautifully packaged production filled with a huge variety of treats and delights.

The Salford Arts Theatre Young Performers company staged the classic 1950 C.S. Lewis novel where 4 siblings are evacuated from war-torn London to a large house in the country owned by the Professor and ran by Mrs Macready, the white witch of the house. The children in their exploration of their new home discover a wardrobe that is a magic portal to the wonderful world of Narnia, here their adventures begin! 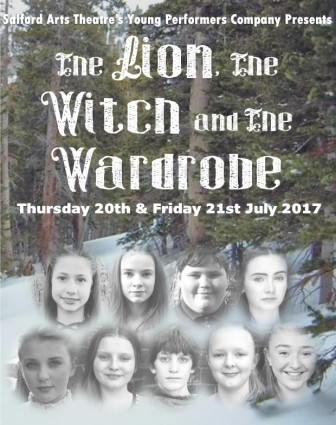 What was striking in the first instance is the brilliant use of the theatre space choosing to use the entire stalls floor rather than just the stage. The characters walked around us, in and out of the crowd giving us a real feeling of being in Narnia with them when we stepped into the wardrobe. The lamppost, which plays such a pivotal role in the story, was also in the middle of the audience adding to this sense of immersion.

There were LOTS of words in this production and all the cast were impeccable with their delivery. Every sentence was clear and well-paced and we were able to hear every single word. The production was clearly well rehearsed with lots of brilliant reactions especially from the Dwarf! The four siblings and the white witch led us through this wonderful story impeccably and I look forward to seeing them in further productions in years to come.

The costumes of the production were also very striking especially when we were in Narnia, the beavers’ and the variety of small animals, the fax, rabbit and leopards, were particularly well dressed and this added a huge amount to our belief of this wonderful world.

The technical elements were also well calculated, the music added depth to the story and underscored certain scenes with perfection. The variety of sound cues while in Narnia added to the atmosphere but all controlled well by the engineer to never overpower the performances on stage. There was a couple of moments where I felt we might have missed a sound cue but the cast carried on and took it in their stride. The most wonderful effect was created by the snow machine as the snow hung in the air for several minutes, caught in the bright cross-lit stage, it really was magical.

Many of the visual aspects of the production was brilliant, the well-rehearsed stage crew using movable blocks to define different areas of the story and the good use of props, but it did feel the wardrobe, as such a major component of the production, could have had a lick of paint to bring its quality up to that of the performers around it.

Overall, this was a sublime production. It was full of brilliant individual and cast performances that really transported us into the magic of Narnia. The promenade style was a perfect choice and the action happening all around us allowed us to be a creature in Aslan’s Army. I cannot applaud the effort that has gone into this wonderful production enough. Go and open the wardrobe door and step into this mystical world with the Salford Arts Theatre Young Performers.