New writing on the fringe scene in Manchester is always something that interests me, as I have unearthed many hidden treasures. However, the production of Cyber Bullying at the King's Arms on the final day of 2018 Greater Manchester Fringe Festival was not one of them.

On this occasion it was a poor script that let the show down. Most of the dialogue was unnatural and repetitive. The words “deck you”, “bitch” and a whole host of swear words were mentioned more times than was necessary.

With a youthful bunch of actors and by looking at the cast list, very little experience, unfortunately that was evident on stage. Messy scene transitions, failed lighting cues and problems with props all occurred during this 45 minute show. 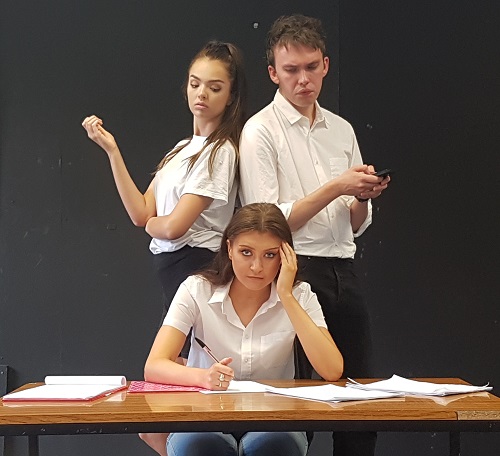 The acting was quite good from some of the cast, with Samantha playing the lead role of Claire showing a nice bit vulnerability to her character. However, the relationship she had with her father (David) felt very unnatural and forced.

As the title suggests the show deals with Cyber Bullying. Claire, is new to the area, and is starting in a new school. She befriends two fellow students; James (Jack) and Emma (Melissa), who later go on to bully her.

I could tell Melissa had worked hard on trying to create mannerisms for Emma. However, she went a bit overboard with pouting and messing with her lips that it became a distraction in the end.

The plot moved way too quickly for my liking and because of that a lot of potential was never realised. I felt like the character of James was going stand up for Samantha, but that never came through and therefore he became a weak character.

For a show that is about cyber bullying I felt they had a great opportunity to incorporate some multimedia in to the performance, e.g. videos, pictures etc. I know there were probably budget restraints with this.

Cyber bullying is certainly an interesting topic, however on this instance you’re only as good as the material you’re given. I feel the show would fit in nicely as a theatre in education setting, but in its current format sadly I doesn’t suit a mature audience.