A Broadcast to the End of the World - Eagle Inn

Lately it’s been difficult not to feel like we’re on a planet that is rapidly approaching some version of the apocalypse. With the unrelenting approach of climate change, stockpiling for Brexit food shortages and the very real possibility that Donald Trump could accidentally nuke us all – jokes about the end of the world carry some degree of sincerity. Joe McGrath has creatively and comically tapped into that collective anxiety in his one man show A Broadcast to the End of the World, which debuted as part of GM Fringe this week.

Set in an unknown location somewhere on the British Isles the play follows Radio DJ James Carr (McGrath). As the only survivor of a team of broadcasters, James is tasked with providing information and entertainment to an audience that may not even exist anymore. This production deftly employs sound design throughout to assist in the storytelling, opening with a convincing recording of a BBC News report. 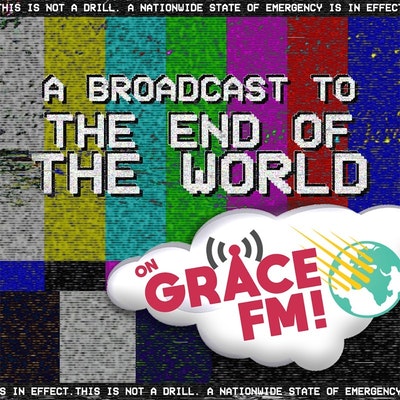 As the audience sits in darkness the reporter details the escalating chaos, the weak government response and urges the public to find shelter immediately. It’s clear then that the end has arrived and McGrath very skilfully uses props to provide an opening for exposition. Beginning the play with a video log, James details how he ended up alone, in a radio bunker, shouting into the void. It all started with a phone call a few days after the beginning of the end, from a mysterious Scot with a plan to maintain some semblance of civilisation– and one rule “Don’t stop.”

A year and a half later we see James scraping the bottom of the barrel trying to find ways to entertain those listeners he has to believe is at the other end of the mic – he dedicates an hour of airtime to “people who were locked up, starting with Gary Glitter”. This exploration of life in the bunker provides ample opportunity for comic relief. McGrath’s comedic strength really carries this show and works to endear his character to the audience very early on, so that James’ slow decline into hysteria as a result of his isolation and claustrophobia pays off well. This is also where the direction is rewarded; the audience is cast in the role of radio listeners who, unbeknownst to James, silently witness the character’s degeneration, making his suffering all the more poignant.

A Broadcast to the End of the World explores the very human drive to chase any semblance of order and control in the face of unremitting chaos. James is visibly striving to hold on to vestiges of the world he lost, his initial refusal to swear on air and break established broadcasting rules displays this need for normalcy. Over the course of the play both James and the audience are brought face to face with the distressing reality that we only hold so much power over our own destiny – but that doesn’t necessarily mean all hope is lost.

McGrath isn’t afraid to venture into some darker areas of the human psyche, and an interesting allegory on mental health can be read in this text fairly easily. Ultimately, this is a creative and fun dark comedy that manages to strike an effective balance between despair and humour.