My Fitbit Called Me A Fat Bitch - The Kings Arms

On the hottest day ever in July and the second hottest day on record Writer’s Reign Theatre presented its Greater Manchester fringe production of ‘My Fitbit Called Me A Fat Bitch’ written by Ronnie Leek and directed by Pegeen Murphy at The Kings Arms in Salford.

After winning the ‘Best Comedy Play’ at the Manchester Fringe last year for the production of ‘Trollope’ I was intrigued to see their 2019 creation. With a cast of four Cloud Man (writer Ronnie Leek), Dom (John O’Neil) a man governed by his phone and social media, Sadie (Kasey Cristian) controlled and dominated by her Fitbit in the utopian plan to meet her perfect partner and the Janitor (Barney Harwood) the software of the cast who buffered and cleaned up the evening was set to be an good one.

Cloud with a capital ‘I’ opened the stage adorned with a blue and white clouded suit and introduced the audience to the world of iCloud, cyber space and our own digital footprint. 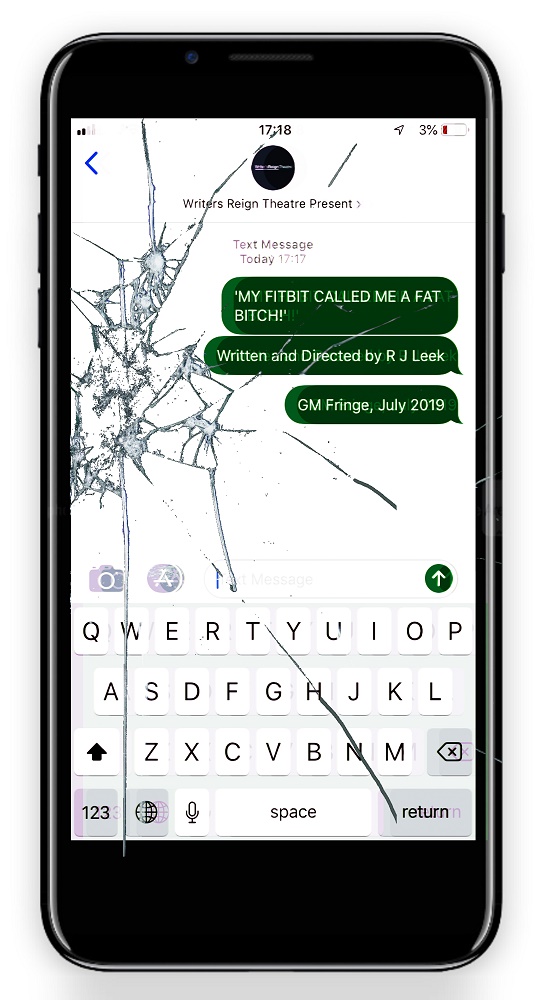 The show’s clever script is written in rhyme and interlinked seamlessly, taking the audience on a journey of the good, the bad and the downright ugly aspects of the Internet and social media.

The show was engaging and thoroughly relatable with the modern era of mobile phones and gadgets taking us through an array of habitual traits and routines that we see every day with the staggering amount of Internet users via our portable devices. Typical scenes of people staring at screens in every social setting including restaurants and how society has lost the art of face-to-face conversations with the virtual reality world of Facebook, Instagram, Twitter and Snapchat never really having a touch of actuality.

Even dating has become ‘throwaway Britain with a swipe to the left or right on looks alone, creating social pressure to be perfect even if it’s at our own detriment of dreams and aspirations. We are made to feel we have to be what society convinces us we should look like physically creating a robot race who are slaves to technology.

Some fantastic light-hearted scenes by the cast and writer looking at Alexia, Siri and satellite navigation had the audience chuckling even in the intense heat and then some absolute polarity scenes that were thought-provoking and disturbing of the dark web with keyboard warriors, trolls, sex, blackmail and child grooming on the ghastly grotesque vile side of the Internet media.

With only a few hiccups of the writer forgetting the script (to be fair in the overwhelming heat I’m surprised they all stayed on their feet) the show was an absolute golden nugget.

A special mention must go to Kasey Christian who was the standout performer with her acting, interpretation, perfect timing and phenomenal singing voice was an absolute pleasure to watch.

Well done to all involved and I honestly wouldn’t be surprised if they win again this year as the show was thought provoking, engaging and thoroughly relatable to all.