'Red, Orange, Yellow, Green and Blue I Can Sing a Rainbow' (well nearly)..... oh wait that's a song of the fifties and wasn't included in this show, hardly surprising as this is a musical set in the 60's but the fabulous cast of Shout! certainly shone as colourful and bright as a rainbow at The Winter Gardens, Blackpool this evening.

Taking us on a journey through the 60's through iconic songs are Suzanne Shaw as Red Girl, Niki Evans as Orange Girl, Amelia Lily as Yellow Girl, Liz McClarnon as Green Girl and Helena Blackman as Blue Girl. There is little in the way of a plot, briefly all the girls are avid readers of popular Mod magazine Shout! and after writing into the magazine they eagerly scour agony aunt Gwendolyn Holmes column for her practical advice to their problems. 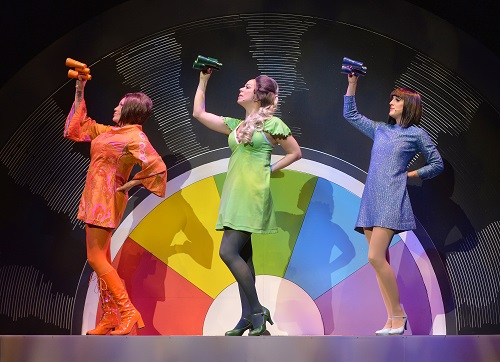 The stock reply seems to be that all that is needed is a change of hairstyle and makeup, so will our girls be able to fathom their 'true colours' themselves? The song choices for the musical are cleverly linked to each girls problem and the latest trending articles in the magazine, from latest fashion, knee high boots, cue 'These Boots Are Made For Walking' to pop group the Beatles and American fan Yellow Girls obsession with Paul McCartney, 'I Only Want To Be With You'.

The show opened with a medley of songs featuring all five dressed in their relevant coloured rain-macs and with a lively dance routine . There was little break between songs with each Girl receiving their advice from the unseen agony aunt and each having the opportunity to display their individual singing skills before being joined by the others. I particularly loved Amelia Lily and Niki Evans, former X Factor finalists who have both gone on to achieve successful musical and theatre careers. This evening they demonstrated powerful and amazing vocals and an ability to act too. Lily, performing lead vocals in 'Shout', was absolutely brilliant and the rendition of 'You're My World' and 'All I See is You' sung by Evans and Blackman was really moving. Lily also managed to keep her American accent throughout too. Blackman came down from the stage and interacted with the audience whilst singing 'Don't Sleep in The Subway'. With so many strong singers in the show I did prefer the individual performances to the combined as the harmonies did not always seem to work between them and sometimes they came over as loud, giggly, screaming girls. 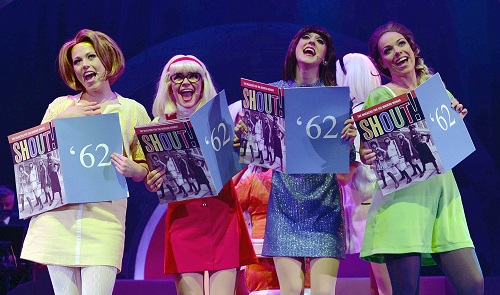 The set was simple and complimented by colourful light changes but at times the five looked lost on such a large stage. Shaw's portrayal as geeky Red Girl brought some hilarious facial expressions and comedic moments, of which there are many, throughout the show. Liz McClaron of girl band Atomic Kitten fame also gave a great performance as the 'free lovin' (promiscuous) Green Girl. A special mention should also be given to the wonderful band on stage recreating the sound of the sixties and the amazing Lala Girls with supporting vocals.

The pace was fast and loud and all credit to the girls for their stamina as they performed hit after hit accompanied by energetic dance routines. With little script between songs, it was more a trip down memory lane and a revue featuring songs of Cilla Black, Lulu, Petula Clark and Dusty Springfield amongst other iconic songs and artists and reminding us of the dubious groovy and fabulous fashions of the decade. (yes I was around to actually wear some of them, oh the influence of those mags!)

There is a strong cast, great fun performances and memorable songs that will have you singing along, but Shout! will not be everyone's cup of tea, a definite Marmite show, however judging by the audience reaction at the end of the evening the majority appeared to love it as they were up and singing along to 'Those Were The Days'. The show continues at Winter Gardens until November 3rd 2016, my advice, go along but don't expect a full blown musical with a great plot and script and just enjoy the songs and frivolity and you won't be disappointed.

For further information and tickets: http://www.wintergardensblackpool.co.uk/movies/shout-the-mod-musical/