I bet we all know someone, you know the miserable one, the one that moans about everything, the one so self centred that they can't see how their actions could affect others, the one who complains about Christmas and all it entails, the one you call Scrooge and buy the 'Bah Humbug' hat for at Christmas (could this be you?) ..... I suggest this year you buy them (or yourself) a ticket for this wonderful musical and just maybe everyone will begin to see how with just a small gesture the happiness they could bring and be part of.

Tonight, we see the Charles Dickens novel ' A Christmas Carol' brought to life in this fabulous adaptation by producer/director Anne Dalton who is also responsible for the music and lyrics. Her company ABD Productions are to be commended for the set, wardrobe and costumes which are a delight to see, adding colour to what could be a dark and depressing storyline. The scenery changes are simple, effective and smoothly executed and the use of lighting at the front of the stage is distracting enough to make the changes without having to bring the curtain down each time. The choreography is polished and even the very young of the cast keep up with the energetic moves unfalteringly. However, occasionally some of the dance routines seemed a little repetitive and too long. The songs performed tonight are accompanied by recorded music and I would have preferred there to have been an orchestra but the quality of the sound nevertheless was very good. 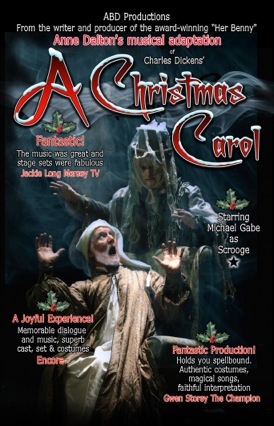 The musical centres around a miserly old man, Ebenezer Scrooge, sole proprietor of Scrooge and Marley. A man too mean to add coal to his fire and suggests his clerk Bob Cratchit warms himself by the candle, a man reluctant to even allow this family man a few hours to spend with his wife and children on Christmas Day. Scrooge, a hunched up, friendless, bad tempered man, refusing to donate a few coppers to a charity helping out the homeless and suggests there is room in the workhouse for them, he even begrudges the donation given by Cratchit and thinks he is obviously paying him too much. A man who slams the door in the face of a lone carol singer. The uncle, invited to family gatherings but never attends.

Scrooge is superbly performed by Michael Gabe who acts the part, looks the part and with great vocals is just as you imagine the Charles Dickens character to be. His long suffering clerk Bob Cratchit is tentative around him and bears the brunt of his bad temper daily but manages to stay cheerful himself. Peter Chapman portrays Cratchit perfectly with his slightly timid ways but cheerful disposition and gratitude for all he has.

The first of the spirits appears and Scrooge is transported back to the schoolchild days of his life before seeing himself working as an apprentice and his engagement. Georgia Chadwick is enchanting as 'The Ghost of Christmas Past' and her illuminated costume brings a magical feel to the musical as she floats around the stage with the heavenly spirits. The young boy Scrooge is tonight performed by Haydn Tudor Jones who gives a brilliant solo of 'The World inside My Head'. Playing 'The Ghost of Christmas Present' is Peter Brindle who is responsible for showing Scrooge the error of his ways. Brindle gives a consistently strong performance throughout and has amazing vocals too. Able to see his future courtesy of 'The Ghost of Christmas Yet To Come' will Scrooge want to change his ways? Will he continue with his solitary life, unwilling to help others or share his wealth? Will he take the opportunity to make a difference now he has seen what his future is to be?

As in all good books you need to turn the page to discover, or as in this case simply get along to the Charter Theatre, Preston and you will find out! You will not be disappointed with the fantastic performances given by each and every one of the cast from the children to the adults they gave it their all, whether singing, dancing or acting in this exceptional production of A Christmas Carol.

For tickets and further information: https://prestonguildhall.co.uk/shows/christmas-carol/