Established in 1999 'Beyond the Barricade' is a musical theatre review in concert style. It stands out from the crowd for a couple of reasons, the first as every note is sung and played live. Secondly, the show features only 'Les Misérables' principles, bringing with it a wealth of industry talent and experience.

As we enter the theatre, the curtain is open and the stage is alit with a blue setting. The staging is minimalistic, and other than the band set up at the back and a few microphone stands, we see lights and a projector screen on the back wall - which throughout displays various themed projections.

Both of the female vocalists feature in the 'Les Misérables' film and have West End credits. Rebecca Vere has a beautiful strong soprano voice, Katie Leeming is a powerhouse belter with lovely vibrato.

David Fawcett, who provides the links between the songs throughout the performance, was full of character and I don't think there's a song he couldn't sing, 'Bring him home' – a particular highlight.

Who says men can't multitask? Andy Reiss proves us wrong, not only delivering an outstanding performance vocally, he does this whilst playing the keyboard and musical directing. He does each with equal conviction. The band was a four piece and gave the sound of a full orchestra.

I spent most of the first half of the evening deciding who I liked the best, every time I came to a decision, the next performer did one better. So I came to the conclusion that I couldn't fault any of them, I did however decide on a few favourite moments.

From Miss Saigon I enjoyed 'Bui doi' with flawless harmony lines, 'You'll never walk alone' from 'Carousel', a crowd pleaser and 'Phantom of the opera' an amazing 'All I ask of you'.

One might say, it's quite a hard task taking on the role of Jesus, but for a man who has toured the world in countless productions, including 'Evita' and 'Chess'   'Gethsemane' from 'Jesus Christ Superstar' seemed to be a walk in the park for MD Andy Reiss, this was a show stopping moment.

We start the second half in Liverpool with 'Blood Brothers', I loved this entire section, each character played to perfection, a particularly comic scouse David, and a tear-jerking moment in 'Easy terms.' 'Little Shop of Horrors' was included with one of my favourite songs 'Suddenly Seymour', I keep wanting to say West End worthy, but that's exactly what we get from these four professionals, they are plucked straight from the West End.

My only criticism for the evening was sound related, I was in the circle and struggled to hear parts of it, the whole thing needed to be louder. However taking a look around the audience, I think with the demographic being of an older generation, if it was any louder there may have been a few complaints.

We see very little movement throughout, being that it's in concert style and costuming was classy black cocktail dresses and suits, and for the second half a more elaborate dress for each lady, full length with diamante style accessories.

The audience hung on every word and the cast had a well deserved standing ovation after the highly anticipated 'Les Misérables' section to end.

A lovely evening at the charter theatre and only the beginning of this year’s tour for the cast, I wish them every success for the rest of the run, well worth a watch when it hits a theatre near you. 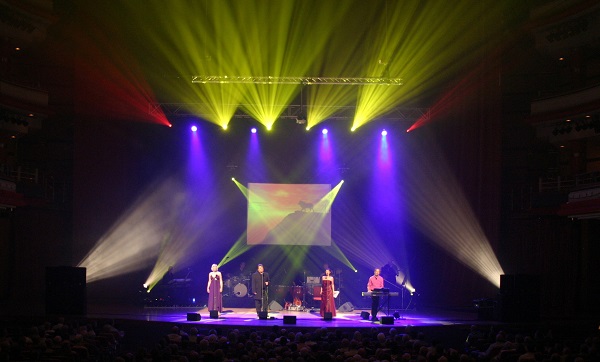