Mr Darcy must be one of literature's most romantic figure; a masculine, heaving hunk in a wet shirt and tight cream pants. The Question is... How does Mr Darcy end up in 'Rebecca', so to speak? Not the sort of a question I thought I would be pondering on a Wednesday night.

Jane Austin is sat in a study writing her novel. She leaves the room leaving her book open, Mr Darcy comes to life and starts to write his own preferred storyline and also that off Miss Brockhurst; a character Jane had previously and cruelly cut from one of her other novels. This show takes us, by the seat of our pants, through a series of Austin's novels and storyline, whilst also dipping into the worlds of other female literary writers. Be assured that no previous knowledge is need to enjoy this show.

The stage is set for a 2-hour double hander, where we are introduced to a myriad of literary characters who don't always appear within the own storyline that we, and they, are naturally at ‘home’ within. The play is written and performed by Maggie Fox and Sue Ryding, who are better known as 'LipService'; a comedy acting duo who have an easy and relaxed stage partnership. They take the audience through a variety of stories, whilst paying homage to Emily Bronte at the same time.

The stage is simply set and is adorned with individually hand embroidered tapestry panels and large quilts which have been produced by groups from around the country. Hopefully the show will be collecting more and more panels that people have made as it continues its tour. The hand-tied loose leaf programme was an additional handcrafted way of helping this production have a sense of being 'made with love'.

Fox and Ryder reminded me of an avant-garde French & Saunders; not necessary because they are a female comedy duo, but for the perfect and accomplished comedy timing and the way they have an easy and relaxed stage presence - especially when things become spontaneous and off-script.

Simple on-stage screens were used to convey numerous setting and locations and were used inventively to flow the story from one scene to another. The audience were taken through a sequence of witty and sometimes anarchic plot developments which included the use of puppetry and projection, physical comedy, costumes and even a diving Lego character!

This production was full of fresh and inventive comedy ideas and is an absolute joy from start to finish. It can only be a matter of time before we see this hilarious duo on TV delivering their fresh and exciting brand of comedy.

Mr Darcy Loses the Plot continues at the Oldham Coliseum until the 21st January 2017 http://www.coliseum.org.uk/plays/mr-darcy-loses-the-plot/ 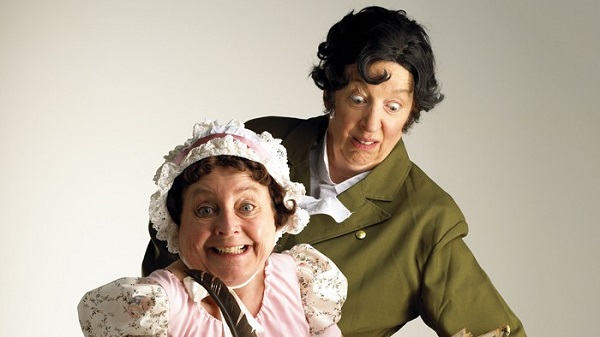