It’s the final date of a tour that’s been running for more than a year and Ruby Wax has the perfect excuse to look, well, frazzled. The show is starting 15 minutes late because of train delays – well, we are in Northern Rail territory, after all.

At first glance it’s hard to tell, with her corkscrew curls and raucous wit on full power. But this isn’t a stand-up night, instead the comedian is here to talk about mental health and mindfulness so she does let her guard down somewhat.

Frazzled is a strange creature, not really a comedy night, not quite a lecture but somewhere in between. In fact, Wax manages to hit a happy medium that keeps a mainly female audience in her thrall throughout, with anecdotes and asides to amuse, coupled with simple exercises in mindfulness where the theatre was so quiet and concentrated that you could hear a pin drop. 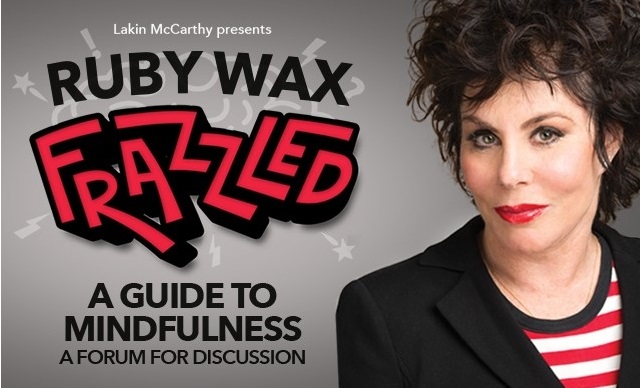 As someone who has suffered with depression herself, Wax is amply qualified to talk about mental illness, a subject that is still skirted around and swept under the carpet. Frazzled does an admirable job of putting it centre stage and slap bang in the spotlight, and as I left the theatre I could hear animated conversations all around me – bravo to Ruby for being a catalyst to such open discussion!

The first half of the performance meandered far and wide, from the brain, to Brian Cox, Hawaii, brooms and touring mental institutions. Her sharp wit and comic timing is showcased well, but what did come as a surprise is Wax’s grasp of the ‘sciencey bits’ and how well she conveyed them to her audience. As she proudly announced, she is an Oxford graduate and she obviously delights in the scientific side of the subject at hand, sharing her knowledge without becoming to preachy or complicated.

The second half of the evening consisted of a Q&A session, and some well thought out and interesting questions, ably handled by Wax. But this is Blackpool, so it could have been awkward when someone piped up with a query about her skincare regime and what toilet rolls she liked, But as an old hand at stagecraft, the comic handled it with (rather puzzled) aplomb.

An educational and entertaining evening, Now, I’m off to practise my mindfulness exercises…