‘It won’t be long before they’re naming buildings in Birkenhead after the pyramids of Egypt! Never going to happen.’

As someone who was born in Birkenhead and whose Grandad worked at Cammell Laird for 20 years, ‘Down Our Street’ was a show that had intrigued me. Taking you through the history of one of the most famous shipping yards, it tells the story of the inception of the yard, up to the present day when it was reopened by John Syvret and made and launched the ‘Sir David Attenborough’ (in other words, Boaty McBoatface). It was written, produced and directed by the local Brian McCann and is a fascinating piece for anyone interested in local history, or who has their own memories of the shipyard. 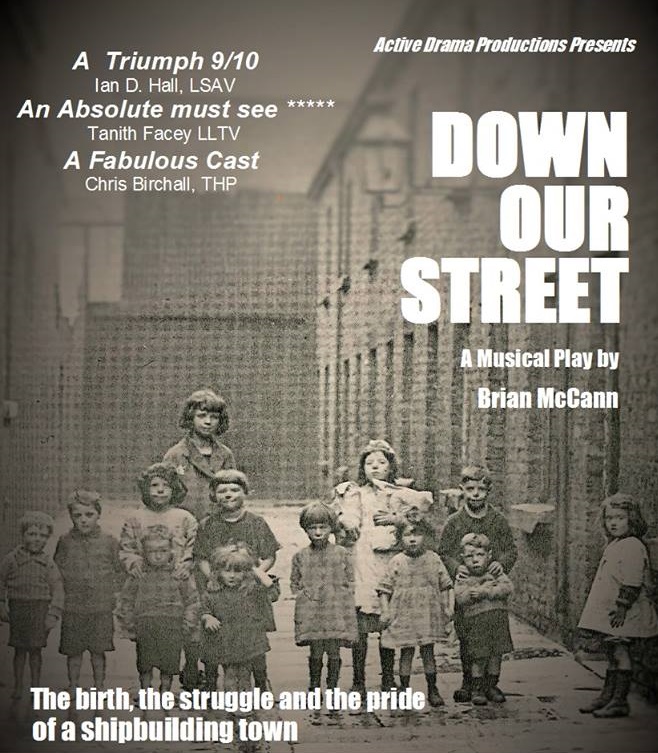 I wasn’t sure what to expect from the show. Maybe it was going to be Birkenhead’s answer to ‘The Last Ship’? However, it was an evening where we learnt and almost 200 year history in. 2 hours. The premise of the show was good, but there were times when the plot seemed really jumpy and a bit rushed, which meant it didn’t fully make sense, until your brain caught up and realised what was happening.

All of the cast were integral to the story and seemed to gel well together, however there were times when some didn’t seem to know what was happening, or what they were meant to be doing. Some of the vocals during the songs weren’t the strongest, and whilst in some songs it worked because you were more bothered about the local spirit and the story, in other songs it was noticeable and felt more like a cacophony than harmony. But the spirit of the performance and the sense of community was there amongst all the cast, which even featured famous locals, such as Tina Malone and Billy Butler.

The children from MYA Space also added to the atmosphere and helped to tell the story when the adult ensemble were not enough, and add a very sombre scene during the Second World War segment of the show.

The staging was very simple, just made to look like a street with a screen at the back of the stage, which was used to show video clips of the shipyard and other important events and also told us when actors where portraying famous faces. The set worked really well with the show but the lighting was a bit hit and miss whether it was the actors missing their spot or the lighting not quite being right, I’m not sure.

Overall, it wasn’t the show I’d been expecting, but it was definitely good for the nostalgia and learning more about local history.