A chance meeting in Japan with Master of the art of Taiko, Masaaki Kurumaya Sensei over 25 years ago set Neil Mackie and Miyuki Williams on the road to a long and successful career as Taiko Drummers and establishing the Mugen Taiko Dojo in 2002 in Lanarkshire, Scotland, their headquarters and training centre, running courses catering for absolute beginners to experienced Taiko drummers. For those not familiar with 'Taiko', myself included, the word translates from Japanese simply as 'Drum' and Mugenkyo have created a show revealing incredible strength and energy as they perform on a variety of drums ranging from some of the smallest to the biggest drum I have ever seen which I believe is the 'Odaiko' drum.

The seven that make up the troupe are founder Neil Mackie, co-founder Miyuki William, Markhus Guhe, Bren Neill, Stella Chan, Edina Naga and Maja Munivrana. The first half of the show is entitled 'Tribe' and described as ‘a celebration of our collective human spirit' and covered seven different sets which featured the amazing skills of the troupe performing together with incredible timing and including individual performances. 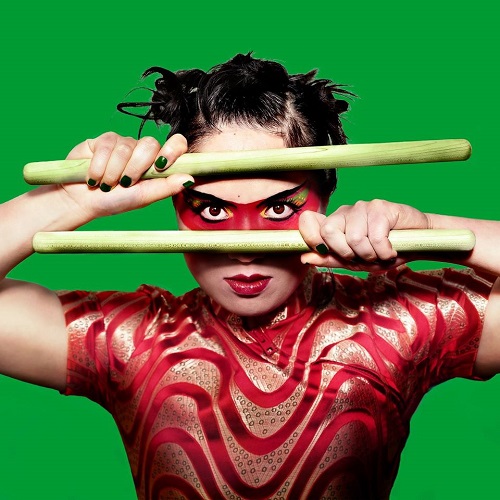 The use of a megaphone during the performance of 'The New Tribal Revolution' was not as effective as I think was intended, as it was quite difficult to understand what was actually being said at times. Several other instruments are used throughout the evening including a bamboo flute, gong and xylophone. The use of ultra violet lights with dancers swirling strands of material in perfectly choreographed routines was effective in creating an ethereal atmosphere. The first half ends with an intense 'One World Tribe' with the haunting message of 'One Beat One Tribe, One Voice One Tribe, One World One Tribe...We Are Tribe'.

Everyone is given a free programme before the start which lists and explains each set, but not having the opportunity to read beforehand or during the show it is difficult to know quite what was going on at times. After each number the stage is plunged into total darkness whilst drums are being added or rearranged and this would be the perfect time to add someone to narrate in the first half. I would have liked to see the use of more lighting effects accompanying some of the pieces as the stage appeared quite bland.

The second half of the show is entitled Mugenkyo 25 and is a collection of some of the favourite classic pieces from over the past twenty five years. This starts differently with Mackie explaining a little about the performances we are about to hear which greatly enhanced the enjoyment of the show. I much preferred this half and in all honesty had seen enough during the first half, finding it quite long, but I am glad I stayed for the remainder of the show.

Dressed in grey camouflage 'Warrior' style outfits the team are impressive as they continue with astounding sound and rhythm, the beats at time frenzied and pulsating through you. The speed and dexterity exhibited during the final number of 'Phoenix' is a showstopper with perfect co-ordination as the troupe move from drum to drum using a crossed hands style and never missing a beat, coupled with martial arts style choreography. When Mackie talks to the audience you can sense the passion he has for the art and everyone on stage appeared to be enjoying performing. He was truly grateful for the standing ovation they deservedly received.