Nina: A Story About Nina Simone and Me - Unity Theatre, Liverpool

Nina Simone had a musical career spanning nearly 50 years. In that time she recorded more than forty albums and became a prominent political voice as a Civil Rights activist. This production, a story about Nina Simone’s musical and political career and how she influenced Josette Bushell-Mingo is at the beginning of a two week run at the Unity Theatre in Liverpool.

The production was devised by Josette, a Swedish-based English theatre actress who is currently the artistic director for The Swedish National Touring Theatre Tyst Teater ensemble and Dritero Kasapi, a theatre director also based in Sweden.

Josette entered the stage and announced the scene was Harlem 1969. She introduced Nina Simone; who she was and highlighted the socio-political landscape of America at the time and the racism many black people continued to endure in their everyday lives. ‘Revolution’ was the first song, cut short for Josette to speak about the tragic death of Laquan McDonald. Laquan was a black 17 year old who was shot 16 times in the space of 13.5 seconds by police officer Jason Van Dyke in Chicago in 2014. Josette relayed the story, stamping on the floor 5 times to demonstrate the gunshots before talking some more about the incident and stamping on the floor a further 5 times before saying there would be 6 bullets still left to fire. The manner in which Josette demonstrated the gunshots emphasised both, the brutality of the act as well as the sheer excessive use of the firearm. Perhaps, due to the prevalence of these killings, the details may often be overlooked by those seemingly not directly affected. Josette didn’t allow for the audience to be afforded this ignorance. Josette spoke about the Black Lives Matter movement which reinforced the programme notes by Stuart Leeks. An article entitled ‘Integration Not Segregation’ quoted Martin Luther King’s speech the day before he was killed, in which he said

Stuart Leeks finishes the article by stating that the ‘journey to the Promised Land is far from over yet,’ and the Black Lives Matter movement Josette spoke of as well as the shooting of Laquan McDonald and many others confirms this. 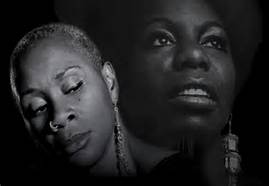 Josette began singing ‘Feeling Good’ and again broke out into storytelling mode to speak about Nina Simone’s first performance. She was aged 12 and was singing in a church with a predominantly white congregation. Nina’s parent were forced to move to the back of the church hall to allow white people a space on the front row and Nina refused to sing unless her parents were able to take up their seats at the front. This incident gave impetus to Nina Simone to become involved in the Civil Rights movement later in her life.

One of the many beauties of this production was the way Josette described events in the life of Nina Simone and how they correlated to events in her own life. When relaying this story about the church, Josette told a touching anecdote of how a group of women had come to comfort her following the death of her mother Elma twenty years ago. The set for the production was simple but classy. A white tasselled backdrop allowed for projections to be displayed whilst the three piece live band accompanied Josette on stage.

The story telling continued as Josette sat at a dressing table behind a white tasselled backdrop. She described seeing things as a child, such as ‘The Minstrel Show,’ where she said black people were depicted by white people as ‘happy dumb Negros.’ There was reference to Bach and his influence on Nina Simone’s music before projections of activist groups and individuals were displayed which finished with Nina Simone saying; ‘If I had my way I’d have been a killer. I would’ve gone to the South and gave them violence for violence, shotgun for shotgun.’ This was an excerpt of what Nina Simone had said in ‘La Legende,’ in response to her feelings at the time of the deaths of black women in Alabama. Nina Simone was talking about killing white people and at this point Josette asked for the house lights to be raised. She asked the audience to imagine she had walked in to this theatre, armed with a gun on this October evening in Liverpool in 2016. She pointed out the few members of the audience who were black who she would allow to go free as well as a gentleman sat next to me who she would let go because he looked ‘foreign.’ The rest of us, she said, she would shoot. This was another moment of the evening where Josette did not allow the audience to simply sit back and be entertained, but brought them into the narrative; personalising the story and perhaps for a brief moment putting the shoe on the other foot so to speak.

Josette walked off stage returning to play some of Nina Simone’s songs including ‘Mississippi Goddam,’ ‘Sinnerman,’ ‘Feeling Good’ and ‘I Loves You Porgy.’ The band consisting of Musical Director Shapor Bastansiar on piano, Marque Gilmore on drums and Jair-Rohm Parker Wells on bass provided an exquisite backing for the sublime vocals provided by Josette throughout the evening. A special mention must also go to Rosa Maggiora who was the set and costume designer as well as Matt Haskins the lighting designer.

This production is running until Saturday 29th October at the Unity and is a must see for fans of Nina Simone as well as anyone who is and should be interested in the Civil Rights movement and the continued struggle of black people across the globe for freedom, justice and equality. This is a must see.