The opening was performed by the large orchestra who had been tuning up in the pit whilst the audience were arriving. From the get go, it was obvious that we were in the presence of expert musicians, and they played meticulously throughout. It comes as no surprise of course, especially from a company as renowned as English National Ballet, but their effortless playing still never ceases to amaze.

The stage, although empty of any dancers at this point, displayed the incredible Edwardian art work on the front curtain. This teamed with the music we were hearing certainly set the scene for what was about to follow.

Act One introduced us to the young versions of the main characters; Clara and Freddie. The child performers set the foundations for the adult versions of their characters, and did so with ease. We immediately grew fond of them and their playful nature, and they firmly took their place on stage amongst the adult performers. The other children who formed the young ensemble were also secure in their roles and were engaging throughout their scenes.

All the dancers on stage showed how impeccable their technique was, and you couldn’t fault a single one. The principal dancers however, were so captivating with their wondrous ballet, that you could fully see why they had been cast in their roles. This particular performance saw Laurretta Summerscales and Emilio Pavan take on the adult versions of Clara and Freddie, however in a company this talented you would see different dancers in the leading roles each night, and not even realise due to perfect consistency. Every movement from every dancer was effortless. They made it look so natural, yet you know that all of it could only be achieved by a lifetime dedication to the craft. This in turn left you genuinely moved by them.

The first section which stood out to me was ‘The Land of Snow’ part. Everything, from the dancers and their costumes, to the music and its atmosphere, to the snowy Christmas tree and back drop was truly stunning. It was a beautiful sight to behold, and I can’t imagine anyone who was witness to it, to say anything other than how warm it made them feel inside.

The other ‘must mention’ was ‘The Puppet Theatre’ section in Act Two. The sheer diversity of dance at this point was astonishing. There were moments where you felt so enthralled by what was being delivered that you only realised the trance like state you had fallen into once that certain part was over. This seemed to be the general consensus of those sat around me, and was further confirmed in conversations I overheard on leaving the theatre.

Having not been to watch a ballet for a good number of years, and my theatre companion never having been to one before, I must say we weren’t quite sure of the story or what was in store for us. However, we were both mesmerized by the immaculate performances on display, and all we wanted to do on leaving the theatre was pirouette our way home. 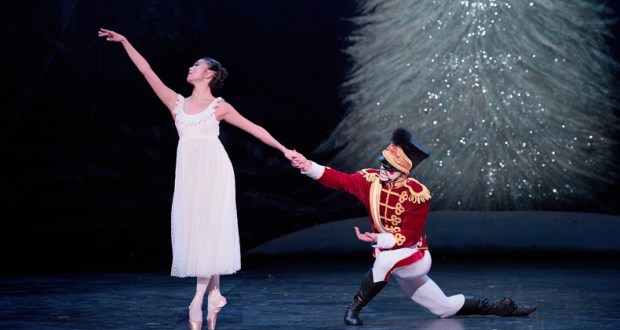