The uniting theme that links the monologues is the title ‘Dark Voices’ and darkness takes many forms. All but one of the monologues were delivered directly to us, the audience, in the intimate setting of View Two Gallery.

In this monologue we were confronted by many voices - dark, extreme, with very strong language; we were assaulted by gruesome, disturbing and disturbed, pain-filled voices. The darkness is in the past but Albert has to confront it.

A soft, intelligent voice of a woman literally fleeing the darkness. She is trying to remain emotional strong, holding it together for the sake of the two children she is with. Finding comfort in the her memory of “A Passage to India” by E. M. Forster.

A touching bitter-sweet performance by Nic Hardman, but the darkness remains, pulling her backward.

“Onward” written by Amanda Burton and directed by Wes Williams

This judgmental and religious voice created a mix of emotions - initially irritation and annoyance, then a moment of pathos and then the darkness was revealed, a secret group on the dark web.

A faultless performance by Annie Edwards, she really was a “very good girl”!

A musical guest (for one night only)

Straddling the interval came the musical stylings of Mike West. He brought us three original songs which seemed to have influences from Folk, Country and Indie genres. Mike’s gruff musical voice was full of the angst of a youth becoming a man. His final song, which opened the second half, was a glimmer of light, willing us on and back into the darkness.

Initially this voice faltered, there was a shame, an uneasiness connected to a past full of pain, belittling and betrayal. However, the voice become stronger, full of murderous revenge, the darkness consumed him.

Callum created great light and shadow in his performance with a vulnerability that drew me in; I almost accepted the crime he had committed due to the mitigating circumstances.

For me this was the most chilling of all the voices. A misunderstood voice, a lonely voice tainted by grief and fear but with a disturbed mind. A mind that could not see the darkness that had overwhelmed him, but the audience knew what he had done.

A clever and nuanced performance by Archie Roberts.

“Oneironaut” written by Will Cooper and directed by Nic Hardman

A very different voice - one of a philosopher, a thinker but is he a madman or a dreamer? The darkness here is in his lack of answers. What is reality? Is this a waking nightmare?

The human voice is a powerful tool and tonight voices were put to great use, raising many issues, emotions and reactions. A great theatre event in a great venue, happy anniversary Grin Theatre. 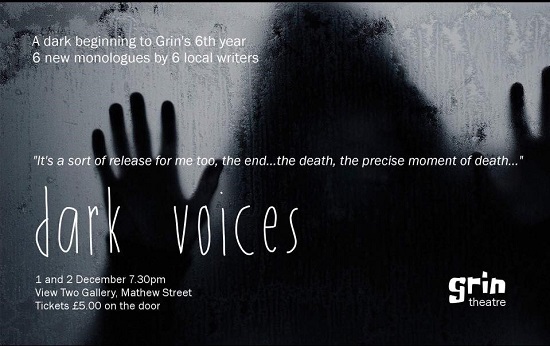