Off to a cracking start, with a huge clap of thunder, opening onto a desolate stage and five mysterious figures. In many ways, tonight's special effects share the honours with the excellent cast, utilising a vast range, visual and auditory. And especially in inspiring humour. Farce here has umpteen costume changes standing in for the usual plenitude of doors; they're so swift and inventive, chapeau bas: you have to take your hat off to it. As do the cast. Frequently.

Well, you must all know the story, and if not, it'd be a shame to spoil it, but the mysterious death of Sir Charles Baskerville, out on the wild and windy moor, needs investigating and Sherlock Holmes is just the man to do it. Except he is largely absent on other business so it's left to Dr Watson. Patrick Robinson takes centre stage, working hard on the almost inevitable 'good doctor as bumbling, bewildered sidekick', but somehow seems oddly at a loss; it reminded me of when they used Aussie TV stars in Panto. Now, that may be the idea of course, to point up clever clogs Holmes, yet begs the question: is the Great Detective so vain he needs an ugly best friend? That said, everybody is a massive fan, hanging on his every word, apart from the surly Inspector Lestrade. 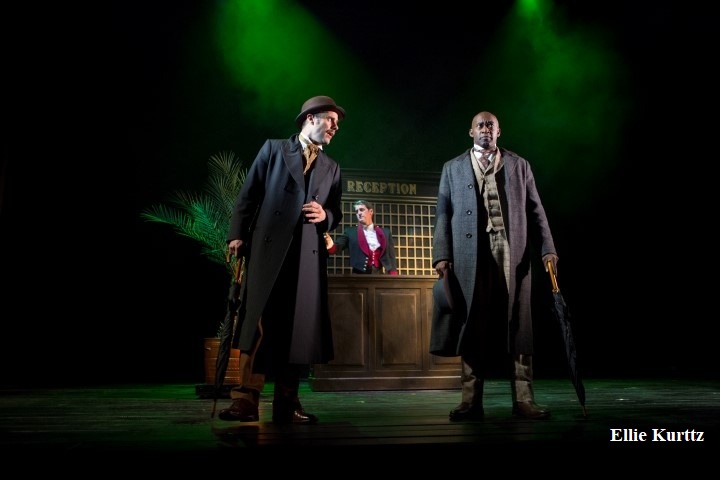 What else is really clever is the multitude of cast members played by the three other actors - the scene where Edward Harrison is, simultaneously, Sir Henry and Lestrade, is one of the funniest and most inventive you are ever likely to see. Then Ryan Pope, most diligent as the stalwart Dr Mortimer and also flighty Stapleton, ensures that each cameo stands out, whether popping up as a Castilian desk clerk or a grumpy trap driver.

As does Bessie Carter, aka Beryl Stapleton, the closest thing to a heroine and love interest for Sir Henry. Amongst many others, she makes a surprisingly flirtatious Mrs Hudson, a Lunnon urchin and the forbidding housekeeper Mrs Barrymore, rolling her 'rs' and chomping on her 'vs' with great relish. Last but far from least of course, Jay Taylor as Holmes, makes his presence felt each time he appears.

As do the aforementioned special effects. They should come as a surprise to work well, or conversely, comprise an in joke, though there is rather a lot of pounding along through the fog in the style of Batman & Robin, or as that image is usually recalled: Del Boy and Rodney. Likeise, The Golem led the way with the mime of walking at a smartish pace. And those blasted miniature puppets on a stick again but at least it works better at a distance. Subversion reigns supreme; helping hands are insouciantly obvious in the nifty scenery shifting: massive iron gates casually wheeled back and forth, props hurled on stage with joyful abandon, even doors ingeniously turning inside out. Again, there's a video backdrop which really goes to town, or rather, to the moors, with lively animation and sinister silhouettes. We are whirled round at break-neck speed with a quick-fire succession of scenes, interior and exterior and back again, including Holme's study, train stations, the house of the Baskervilles, even the Opera.

Deliciously silly, a Gothic romp if you please and it clearly does, cast and audience having the time of their lives. Just the thing to tickle your funny bone and warm the cockles of your heart on a cold winter night.