‘Family theatre’ is such a tricky term – depends on the family, really, doesn’t it? – so the claim by Unity Theatre and Action Transport Theatre that their co-production is ‘suitable for ages 5 – 105’ is a very big claim indeed. How do you keep young children engaged with the story without making it too simplistic for the adults? And how do you keep the adults entertained without risking alienating the children?

By presenting a story that the children can follow with constant flashes of physical humour, but with added twists, and tweaks that the adults will appreciate, all topped off with catchy tunes, an enchanting way with words, and excellent acting. Adults playing children is a particularly difficult act to pull off, with the need to avoid mawkishness, but Luca Rutherford presents an engaging Red, while Harvey Robinson charms as the banjo-playing wolf. Liz Jadav is strong as the axe wielding mother, and Simone Lewis gives a great Grandmother – the most difficult character to interpret. 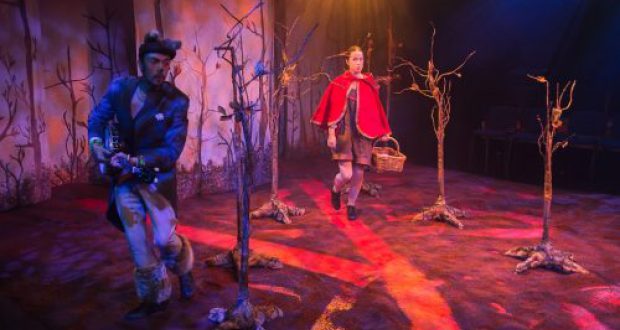 The tale of Little Red Riding Hood lends itself to reinvention. The original story by Charles Perrault has no happy ending – the moral was nice girls don’t deal with wolves; it was the Grimm brothers’ that had Red and her grandmother saved by the huntsman. More recently, Roald Dahl has Red shooting the wolf and making a fur coat from his pelt, Neil Gaiman offers a darkness to match the original, while Toby Forward and Izhar Cohen have presented the wolf’s version of events.

So, what happens in this theatrical version to make it so captivating? Firstly, the characters across the three generations (grandmother, mother and daughter, are thoroughly convincing, with conversations that resonated with one and all. Both adults and children could relate to the way Red, having promised not to stray from the path, gives in to temptation with just one toe, then just one step, finally running happily into the wood; and the ‘too young for X, but too old for Y’ conundrum also struck a chord.  But additional elements in this tale include Red’s perfectly reasonable observation that eating people “is what wolves do”, and that perhaps it would be a good idea to stop chopping down the forests ‘once slice at a time’ thus removing the wolves’ habitat and source of food, especially as ‘Winter is coming!’

This wood is a truly magical space brought to life with the clever lighting, moveable trees, and a path carved from the leaves on the forest floor. There we meet a series of fairy tale characters, and we revisit childhood games. But throughout there is a perfect balance of tension and humour, both reflected in the music and the lyrics. The richness and wit of the vocabulary was simply joyous and the opportunity the children had to go down onto the stage and join in the howling context means that for some members of the audience, this night will live in their minds for ever.

So if you go down to the woods today, you’d better be prepared for fun and frolics but with dashes of dark and sophistication.