A Passage to India - Liverpool Playhouse

Direction by Sebastian Armesto and Simon Dormandy the story revolves around four characters: Dr. Aziz, his British friend Mr. Cyril Fielding, Mrs. Moore, and Miss Adela Quested. During a trip to the Marabar caves Adela thinks she finds herself alone with Dr. Aziz in one of the caves, she panics and flees; it is assumed that Dr. Aziz has attempted to assault her. The trial, brings to light the common racial tensions and prejudices between Indians and the British who rule India.

The original musical score by Kuljit Bhamra was performed live and we could see the musicians Meera Raja and  Asha McCarthy at all times on stage left, they provided an authentic sound really helping to set the scene, for me the show could have used some music before both acts like an overture. 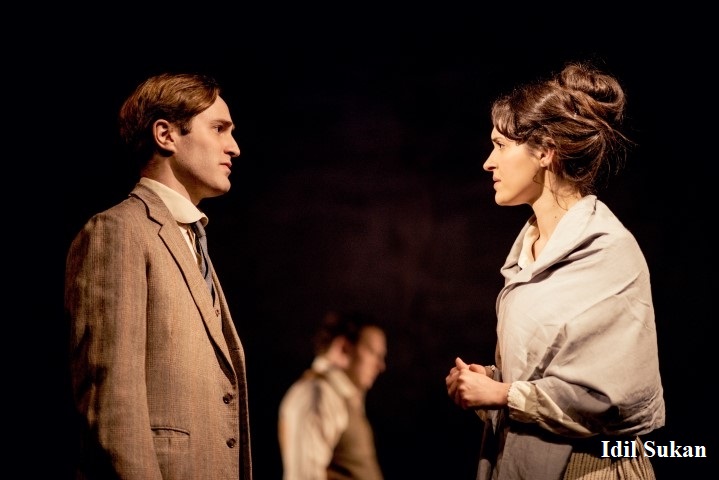 It was slightly distracting at times to see the cast members sitting and standing visibly on the sides of the stage, they didn’t seem to serve a purpose being there and just pulled my focus.

The cast was heavily male but the few ladies certainly held their own, Liz Crowther as Mrs Moore was heartfelt and her years of professional experience certainly show. She gave a great deal of eye contact to every level of the three tear audience. Phoebe Pryce as Adela gave a powerful performance with excellent diction.

A wonderfully believable delivery from Asif Khan as Aziz, bringing a great light and shade to the character. Richard Goulding as Fielding was in my vue perfect for the role. Great comedy element from Ranjit Krishnamma dual rolling as Godbole and Das.

The show incorporated the cast using physical theatre using props and themselves to create parts of the set and setting the scene. Some favourite moments being the elephant, the train and jungle.

Other moments the ensemble vocalised the sound of an echoing cave and rhythmically chanted sections of the text , parts of this were a little strange and hard to decipher.

The set was minimal, but they did well with what they had, and I liked the splash of colour, using the bright saris towards the end. Clever use of lighting by Prema Mehta especially during the cave scenes added to this.

A very talented team of hardworking actors, it’s hard to single anyone out, the cast includes Matthew Douglas, Christopher Doyle, Hannah Emanuel, Tibu Fortes, Richard Goulding, Nigel Hastings, Edward Killingback and Maanuv Thiara. None of the cast seemed to be wearing a microphone and considering that, the projection was fantastic, I didn’t miss a word.

In conclusion, the cast played to an almost full house and it was well received.

Performances in Liverpool up until 10th February.