The Little Matchgirl (and Other Happier Tales) - Liverpool Playhouse

Are you sitting comfortably? Well, that’s all about to change. In a world where Disney has commandeered and sanitised so many stories, this return to the heart of Hans Christian Anderson’s tales rediscovers the courage of true story telling, brought fabulously to life in Emma Rice’s production.

I remember reading The Little Match Girl as a child, heartbroken as, hungry and cold, she strikes each match and, for just a few moments, enjoys the scenes of plenty and of wealth until, with her final matches, she is gathered into heaven by her grandmother. In this production, however, each match gives us another of Anderson’s tales – Thumbelina, The Emperor’s New Clothes, and the Princess and the Pea. Throughout, the puppet of the little match girl remains on view, a constant reminder, as she is deftly and delicately moved about the stage by puppeteer Edie Edmundson, of the reason for the story telling, the singing and dancing, the costumes, and the silliness – that a little girl is dying lost and alone on the snowy streets, ignored by those whose focus is on the consumerism of the modern day until it’s too late. 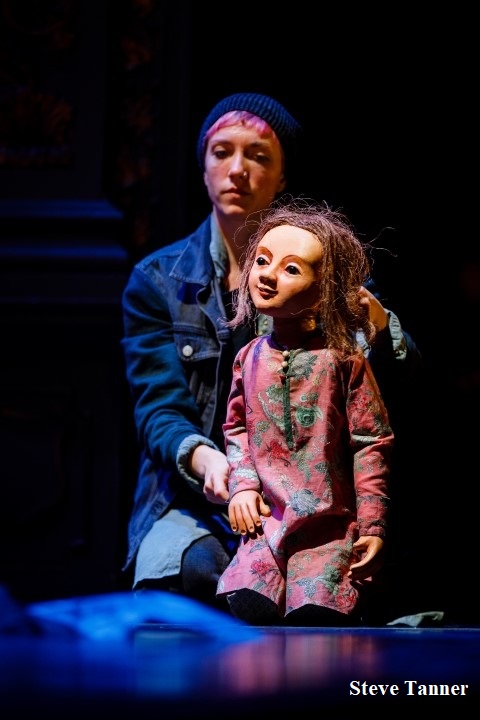 The action is orchestrated by Old Shut Eye, Ole Lukøje, from Anderson’s retelling of the myth of the sandman, the teller of tales, the dream god, whom the Little Match Girl calls into being when she strikes her first match. Here he is played by Niall Ashdown with wit, verve, charisma, and charm, along with ‘The Shut Eyes’, his travelling vaudeville troupe, who light up the stage with their skills and singing, morphing from one character to the next but always entrancing and engaging.

But right from the get go, the set of scaffolding and battered advertising hoarding (an excellent design by Vicki Mortimer) tells us that these tales will be told with a modern setting, which highlights the plight of the most vulnerable – the young, the homeless, the trafficked, the abused, the child refugees, the enslaved.

Thus, Thumbelina – whom we meet first as a puppet but who, as she grows, is eventually played the remarkable Katy Owen - is sent on her journey as her mother is killed by a bomb, and she is finally faced with the choice of staying safe and marrying mole (a retired soldier whose mind seems warped by what he has seen) or trying seek freedom and fulfil her dreams with the swallow. No punches are pulled as she resorts to violence to fight her way to freedom. It’s a troublesome tale and sometimes seems confused though the excellence of the performers carries it off. The mood lightens in The Emperor’s New Clothes, with the focus on the tyranny and absurdity of the fashion industry, the style gurus, how people’s vanity allows them to be scammed by the unscrupulous, ending with Ole Shut Eye as the emperor in an unforgettable birthday suit! And the ending for The Princess and the Pea is altered to reflect on love being put to the test and the obsession with status rather than worth.

However, these darker elements of the storytelling are illuminated throughout by the sheer ingenuity of the production and the excellence of the individual and collective performance; each moment is lit with brilliance and wit – with the linguistic acrobatics of rhyming couplets accompanying the visuals and the music. While definitely for the upper age limit of ‘family show’, it is quite simply an evening of remarkable theatre that should not be missed.