Love From a Stranger - Liverpool Playhouse

Never underestimate Agatha Christie’s ability to pull the rug from under your feet. Having read a lot of her novels in my youth but never having seen one of her plays, indeed, not having heard of any of her plays other than The Mousetrap, I was particularly keen to see how her particular brand of murder and mystery transferred to the stage.

Love From a Stranger was originally adapted by Frank Vosper in the 1930s from Christie’s own stage adaptation of a short story, Philomel Cottage. Lucy Bailey, who has had remarkable success with her production of Christie’s Witness for the Prosecution, chose to update this version to the 1950s, an era beautifully reflected in the set, though the characters and the themes are timeless. However, the set does much more than simply place the action historically, as its translucent panels and sliding rooms allow us an insight denied to the characters on the stage. Thus we, the audience, are in the unique position of watching a crime unfold in reverse, with the question being not ‘Who dunnit?’ but ‘When will she realise?’ 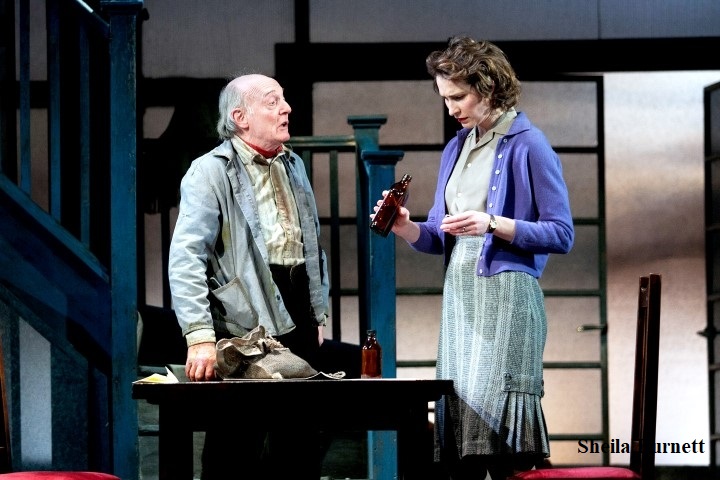 The ‘she’ in question is Cecily Harrington (Helen Bradbury), friend and flat mate of Mavis (Alice Haig), niece of Aunt Loulou (Nicola Sanderson) and long-time fiancée of Michael (Justin Avoth), who is about to arrive back from the Sudan for their wedding. Unfortunately for Michael, Cecily, who along with Mavis, has just won a substantial sum on a sweepstake, is no longer content with the prospect of a safe marriage, and longs instead for adventure and excitement, both of which sweep into her life in the figure of Bruce Lovell (Sam Frenchum), who offers her exactly what she is looking for.

Here, Christie’s remarkable insight into the human psyche and her uncanny ability to build tension come to the fore. Initially, the action has an almost farcical element, with Aunt Loulou’s snobbishness and transparent greed offering some simple humour though Nicola Sanderson cleverly never takes it too far in that direction. Similarly, Helen Bradbury, Alice Haig and Justin Avoth all support Christie’s writing with strong and nuanced performances. We fully empathise with Cecily’s desire for the exotic, we completely understand Mavis’ concern for what she sees as her friend throwing away the chance of a perfectly ‘decent’ life, and we sympathise with Michael’s heartbreak and frustration. And while the minute he appears on the scene we can all see through Bruce Lovell’s charm, that is partly because we have been primed to do so, and it is to Christie’s and the performers’ credit that Cecily’s naivety in falling for him is perfectly believable.

It is in the claustrophobic setting of the second act, though, that the tension really begins to build. Again, the set, the very subtle soundtrack, and the clever use of lighting are an important factor in this. There are still flashes of humour from Molly Logan’s Ethel and Gareth William’s Hodgson who, with Crispin Redman’s Dr Grimble, continue the theme of whether seemingly decent, honest, caring folk will be able to avert the tragedy that the audience has long seen coming.

Is there a twist? Of course there is. We’re talking Agatha Christie here. But you’ll have to find it out for yourself. And in the meantime, you get to enjoy an enthralling and entertaining evening.

Love From a Stranger continues at the Liverpool Playhouse until Saturday 28th April. https://www.everymanplayhouse.com/whats-on/agatha-christies-love-from-a-stranger