What a pantomime - is it really possible for such a transformation, to make a cartoon film into a successful musical? Hell, yes! After all, if somebody can run the gamut from nun to doctor's wife to royalty... Princess Fiona has you wanting to google another word for 'feisty', and you're full of admiration from the beginning before even finding out she's played by Laura Main from Call the Midwife. Acting skills not in doubt; flair for comedy, singing and dancing equally amazing.

Outstanding as she is, a delightful mix of head-in-the-clouds and extremely down-to-earth, the three main men play their part nearly as well. Steffan Harri is awfully good as the ogre with a heart of gold, a neat line in wit and a pretty high IQ, although it would have been interesting to hear a Welsh accent rather than the original Scots. Marcus Ayton makes Donkey 50/50 infuriating/endearing but 100% faithful sidekick/steed, serving up dollops of humour albeit with a side which seemed, oddly, a touch Drag Queen; must be the fur coat. And you are unlikely to get a more appealing villain than Samuel Holmes as Lord Farquaad, although impossible to explain exactly why without giving the most entertaining game away. A bravura performance, let's just say he delivers the epitome in physical humour, and that's only the start. 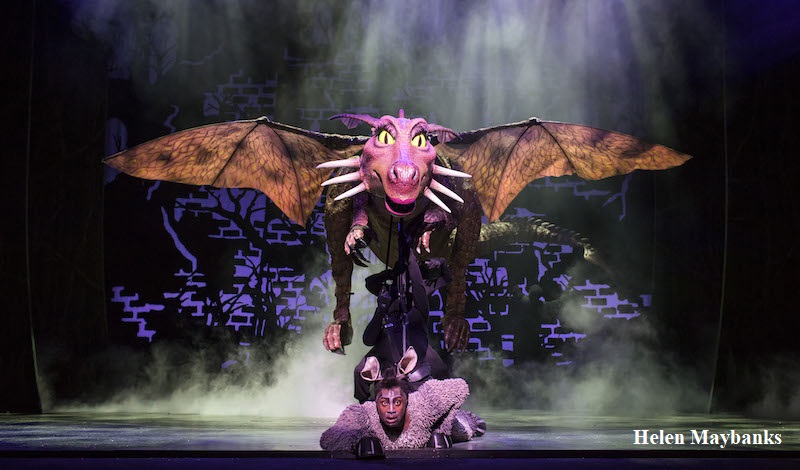 You know the story; of course you do: Shrek's home in the Swamp is invaded by storybook characters banished by Lord Farquaad. But as the latter's aim is to be king, through marrying a princess, all Shrek has to do is track one down for him and his home will be restored to him. Well, find her, then rescue her from an impenetrable tower, and slay a dragon. So we're off on the usual quest, but many an unusual wonder is met up with en route.

But first, a quick round up of the fairytale folk, all excellently brought to life as it were: their rather annoying spokesman Pinocchio (Joseph Dockree), via the cutting Gingerbread Man (voiced, I think, by Sugar Plum Fairy, Jemma Revell), cute wolf (Michael Carolan), somewhat immature Peter Pan (Sam Stones), and Mama Bear with the amazing vocals (Jennifer Tierney).

The vivid scenery is first class, transporting us inside and out, for example: forest; castle; tower; church. And the special effects, worthy of the adjective – even my pet hate, puppetry, is incredibly well done, particularly when reaching that point in the plot: Enter the Dragon. Above all, such a lot of it is so clever, you feel like clapping hands (though no Tinkerbelle), once you stop laughing. One clue: another transformation, with Lucinda Shaw, and not only from Fairy godmother to dragon.

It was a shame however, that a fair bit of dialogue was not very clear, nor some of the lyrics; obviously, the audience was full of children and a particularly boisterous lot they were too. But this is one of those rare, heart-warming musicals which does what it says on the can, without hammering the message home; what you can do best is to be you, whoever you are, because we're all different. And it's full of surprises which you have to see for yourself - a really magical, spectacular treat, for everybody.