The Tamer Tamed - The Casa, Liverpool

In the not too distant past a director expounded to me about how they were going to re-present Shakespeare’s The Taming of the Shrew to challenge and change its poor treatment of women. Without an adaptation they only managed to serve up a well-presented production of the original including somewhat ironically its subtext which, in my opinion, already achieves what they had set out to do.

What they also failed to realise was that for those who miss the underlying point of the original, the perfect riposte already exists in Fletcher’s Jacobean comedy, ‘The Tamer Tamed’, originally known as The Woman’s Prize, and so it was with some expectation and excitement that I looked forward to Millennium Players production in an adaptation by director Maeve Middleton. Sadly, in the space of under 12 months, yet another company has failed to truly appreciate the value of the material in front of them in their pursuit of gender equality.

The play opens with the funeral of Kate, the Shrew from Shakespeare’s original, before we meet her widowed husband Petruchio (Kevin Williams) being consoled by friends Tranio (Yahya Baggash), Hortensio (Adam Byrne), Gremio (Mick Dalziel), and manservant Grumio (Phil Dykins) although it’s not long before Petruchio has his eyes set on the seemingly meek and mild Maria (Angela McComb) as a replacement submissive bride but she has ideas of her own. 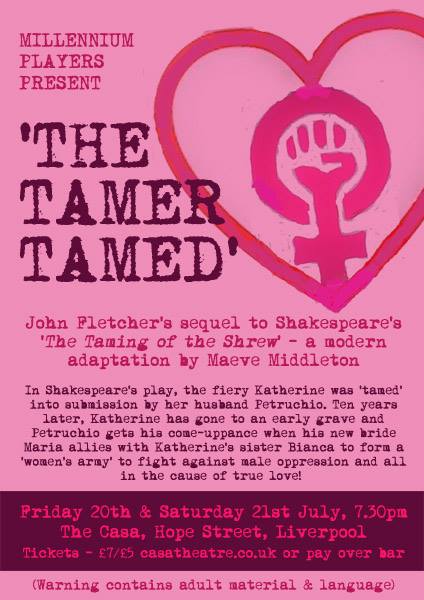 In a sub-plot, Maria’s sister Livia (Abbey Fitzhenry) swoons over young lad Rowland (PJ Murray), with the girls’ father Petronius (Albert Hastings) keen to marry his daughters off but eyeing the old and doddery Gremio as a better-suited match for Livia. What are the girls to do? Well, with the help of Kate’s sister Bianca (Sarah Hall), and a clearly borrowed plot device from Aristophanes’ Lysistrata, the women of the town unite to ban their husbands from their bedrooms until they adhere to Maria’s agenda for male improvement. In a strong and colourful play littered throughout with a spirit of fun, the war of the sexes is about to explode.

The Casa can be a challenging venue if it’s not given proper consideration, so it was pleasing to see that stage managers John Middleton and Chris Armstrong, who also play support roles throughout, had, with the positioning of the ‘fortress’ house next to the staged area taking full advantage of the dynamic of the space as well as creating a useful backstage link to the stage for later scenes.

Unfortunately, the cast were a few rehearsals short of the finished article with the excessive need for prompting in the opening half being replaced by scripts in hand after the interval. There was too much activity backstage from the cast with conversations and cluttering interrupting the scenes which was further exacerbated by issues at the venue – which I’ve never encountered before – as further noise emanated from the adjacent bar as well as an external yard suggesting that an investment in acoustic curtains to the primary entrance and escape doors to the theatre space may well be in order.

One looks for positives and there were some glimmers: Hall’s Bianca was all-knowing and some of the interplay with McComb’s Maria was fun to watch; Murray gave a strong performance albeit a little too shouty on occasion for my liking; Fitzhenry was composed and shows potential; Hastings charismatic and powerful performance was not matched by those immediately around him and the contrast was immeasurable.