The Secret - The Brink, Liverpool

The Secret was an evening of short plays written by members of Liverpool Playwrights, a group which provides support to scriptwriters in Liverpool with the aim of developing their skills and preparing work for the stage. The evening consisted of six plays performed script in hand by a group of local actors.

First up was Mum’s the Word by Sharon Colpman. This featured two sisters (Pam Campbell and EJ Fisher) who are tidying the house while they are waiting for their Mum (Rita Pike) to be brought home from hospital. As they clean Campbell asks Fisher whether or not she is going to tell their Mum she is a lesbian and has met someone. Fisher is reluctant as she tried to tell her mother in adolescence but it was dismissed as a phase.

The play made clever use of props with Campbell and Fisher rarely putting down dusters, a symbol of cleaning things up for appearances’ sake rather than letting them appear as they really are.

When their Mum arrives home it turns out they’re not the only ones with secrets and the neatness of their old fashioned values is turned upside in a revelation that will change all of their lives forever. 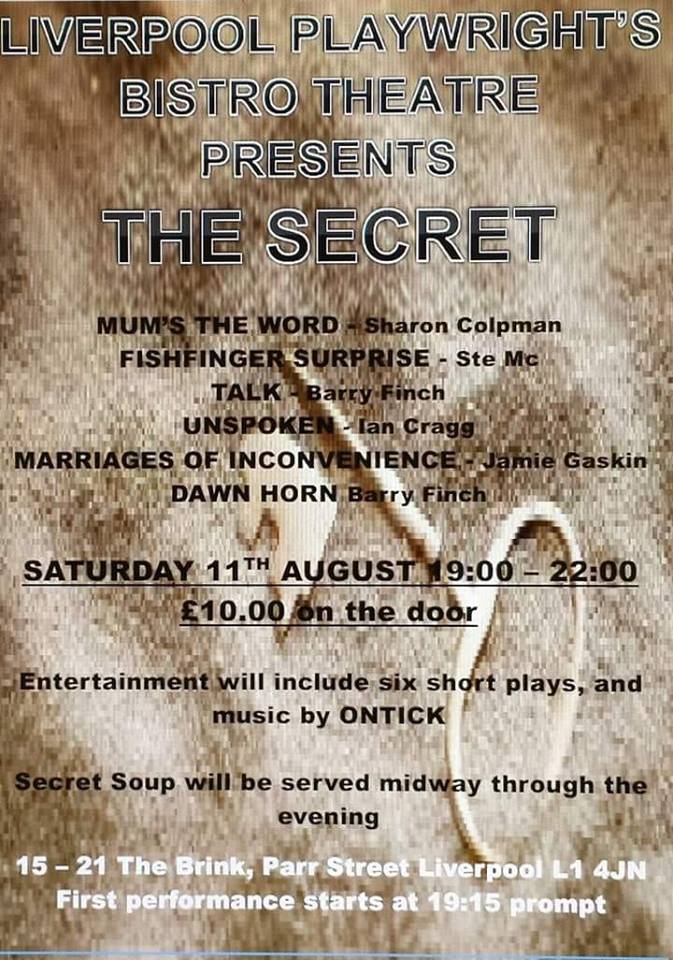 This was followed by the hilarious Fishfinger Surprise by Ste Mc. Telling the story of a couple (Meg McFarlane and John Smith) we were taken into a home where things have become a little too comfortable. The play opens with McFarlane talking loudly to Smith who is out of view in the toilet. As he complains that he can’t have five minutes peace McFarlane quickly begins to tear into him about underappreciating her and bizarrely jumps to the conclusion that he is having an affair with a girl at work.

Examining the role social media plays in our relationships and everyday lives, this deceptively complex comedy is a prime example of kitchen sink for the 21st century.

The first half concluded with Talk by Barry Finch. Another piece featuring a couple arguing (Dominic Fellows and Donna Lesley Price), this piece took the evening on a darker turn. Suspicions of infidelity came from Fellows taking secretive early morning phone calls.

After Price angrily leaves for work Fellows stumbles to a multi storey car park where he is seen standing on the roof for some time by a car park attendant (Peter Mitchelson). Concerned about Fellows’ behaviour, Mitchelson tells him a story about another man who jumped from the same spot six months before who might have thought differently if he’d known the impact of his actions.

The image of the grief stricken widow standing alone on the cold roof is delicately brought to life in a tragic tale with a haunting twist.

The second half opened with Unspoken by Ian Cragg. This told the story of Martin, a writer (John Smith) who has begun isolating his wife Helen (Pam Campbell) as he taps away at his keyboard at all hours of the night. The book he has so nearly finished is ironically about poor communication, which is reflected in Martin’s personality, as he stumbles over words and never seems to be able to say quite what he means.

Driven to desperation Helen visits their GP Dr Burns (Bob Towers) and begs him for medication. Telling the Doctor that Martin won’t come himself as he finds it hard to talk about things, Helen takes pills home to Martin to find he has now finished the book.

As Helen begins to prepare celebrations, Martin goes up to bed to get some much needed rest. In a heart-breaking monologue about self-doubt and fear that his words will remain unread, the sense of regret and pain is palpable in this tragic tale of uncertainty.

The fifth show was Marriages of Inconvenience by Jamie Gaskin. Another comedy, this story of love and disdain examined class and social aspirations.

Jimmy and Charlotte are planning to get married but their parents are unhappy about it. Charlotte’s mother Moira (Rita Pike) is very snobby and doesn’t think that Jimmy is clever enough for her daughter who is going to university to study law. Her father Paul (Dominic Fellows) meets up with Jimmy’s mother Sally (EJ Fisher) and tries to hatch a plan to keep the two apart. But their motives are more complicated than Moira’s, as it turns out Paul is in fact Jimmy’s father. Sally wants to resume her affair with Paul so is quite happy for everything to come out. Moira and Sally’s husband Michael (Bob Towers) catch the pair and a hilarious blow-out occurs.

What feels like a predictable story ends up having many twists and turns which leads to a crazy end that might just leave everyone with everything they ever wanted. Fellows’ bumbling dialogue and uncertainty shows a high level of comedic talent well supported by the other cast members in this light-hearted piece.

The evening concluded with Dawn Horn by Barry Finch. Another couple at home (Donna Lesley Price and Peter Mitchelson) wake up in the early hours to a disturbing noise outside. Both are hungover and don’t need to be up for a while so Mitchelson dismisses Price’s concerns and tries to go back to sleep. As she carries on talking about her worries he wakes up and says if they are awake they should really take advantage of the situation. Pushing him away she goes to the window and sees something truly ominous.

Mitchelson quickly accepts their fate but Price begins to panic and tries to see a way out. But it’s no longer a question of whether anyone will survive, but whether the best can be made out of the dawn.

The Secret was a one night only performance, but was filmed by Cameron Brown of Diverse Entertainments and will be uploaded to YouTube in the near future.

You can find out more about Liverpool Playwrights on their Facebook https://www.facebook.com/groups/LiverpoolPlaywrights/about/