The root of poverty is not the lack of money, it is the lack of necessities and money is a trick by the rich to keep the necessities to themselves while forcing the poor to work for them.

This is the lesson in Robert Tressell’s classic novel The Ragged Trousered Philanthropists. Adapted for stage by Gerard Fitzpatrick Howkins, Richard Helm and director Paul Strange, Merlin Productions Inc performed this tale of political struggle and a dream of socialism.

Following the fortunes of a team of painters and decorators and their struggle to survive on shockingly low wages, six actors took on multiple roles to present a story of workers, bosses and crooked government officials while illustrating the theories presented in Tressell’s original work.

Views which are still present in today’s politics such as foreigners being to blame for the plight of the working class were discussed in detail and shown to be something used by the ruling class to distract the workers from the true cause of their struggles. Newman’s rant against women taking jobs by working and being educated was delivered ironically by Dawn Adams, the sole female cast member, who took on a number of other male roles, in addition to the one female role, Ruth, further illustrating the ludicrousness of the point. 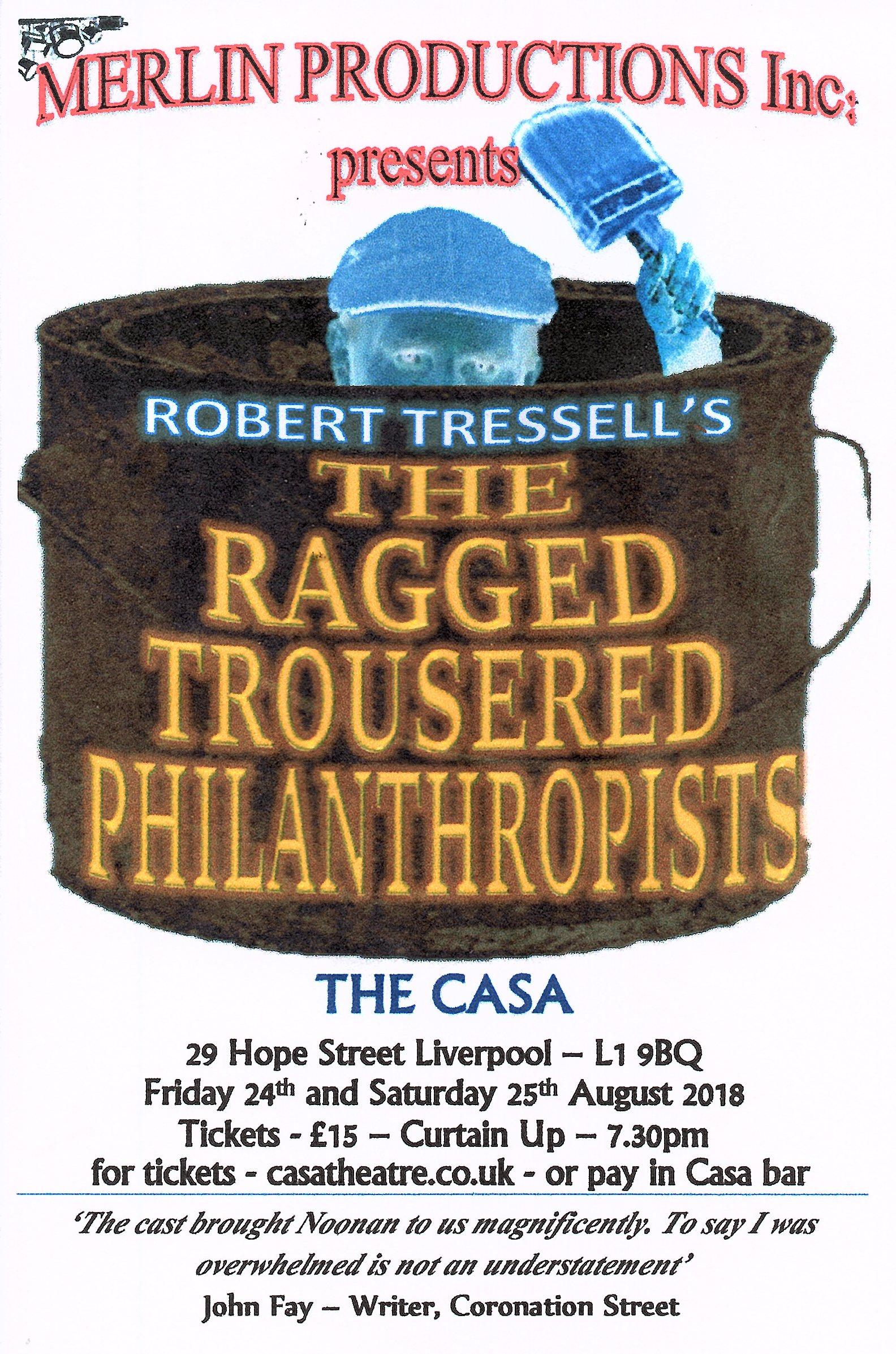 The iconic money trick demonstration was done well, giving the audience a sense of desolation long before the pointlessness of it was worked out by the characters.

The Casa’s two level stage was put to full use with stepladders, stools and paint-pots on the upper level and a simple domestic scene with framed photograph of a baby on the lower level throughout so that even during the scenes featuring only the rich characters, the poverty and home life of the struggling characters could not be forgotten.

The costumes had a simple neutral palette which emphasised the flat atmosphere the characters were living in. Splashes of coloured paint on aprons stood out like war wounds suffered in the battle of backbreaking word. Mr Hunter (Robert Smith) wore a bright red silk tie symbolic of the blood he had on his hands from exploiting the workers and the higher position he considers himself to have. Called “Misery” by the other workers in an act of minor revenge, Mr Hunter’s realisation that he was in fact no better off than the men he ruled through fear and threats was delivered in a beautifully poignant and tragic scene.

The role of Frank Owen (John McHugh), the leading character in the novel who tries to explain socialism to his fellow workers, was performed in a gentle wise way which felt very honest while tinging the play with sadness. The permanent tiredness of the characters was put across well in a style which showed world weary acceptance.

The multiple roles were handled with not only subtle changes in costume as is usual, but a multitude of accents which were well executed most of the time.

The pace varied during the play, but this can be expected when a 600-page novel is transformed into a two hour play.

Using a combination of clear and concise political explanation, gentle comedy and heart-breaking tragedy, The Ragged Trousered Philanthropists explores a world where poor people only have two options to escape exploitation: death or socialism.