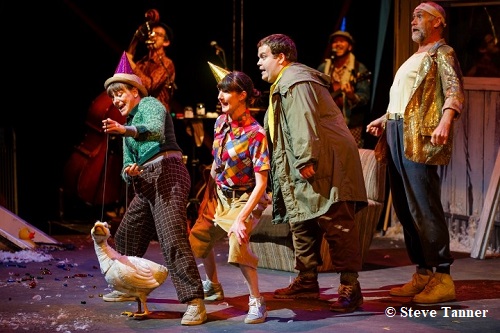 So this is a modern fable? It could certainly be classed as a fairytale, being extremely grim in places, the tale of orphan Tiny, adopted by his apparent reprobate of a grandfather. The boy grows up to be obsessed with building fences, literally keeping things in as well as out. And having lost father then mother under tragic circumstance, still haunted by the latter, he takes to caring for the eponymous Fup, yes, it has to be said, like a duck to water...

Grandaddy Jake lives on a ramshackle farm in the middle of nowhere, passing his time drinking and gambling. He has to prove himself a suitable guardian to Social Services, then prove to his grandson that you really do have to get out there and make the most of life. All of which takes place on a remarkable set, the barn frontage revealing a mini upper stage, with one window doubling as a windscreen, another concealing a still, as psychedelic as the effects of drinking it; immediately making you think 'I'll have some of that'. The puppetry is incredible (goodness, hasn't it come a long way since 'Four Feather Falls'?), particularly conveying the duckling's emotions when it's highly amused for example. The figures seem livelier than some actors to be honest... Equally, the special effects are so inventive, and amusingly so; on a stage littered with junk; naturally, you pull a clean shirt out of a washing machine. Which later serves as a jalopy. 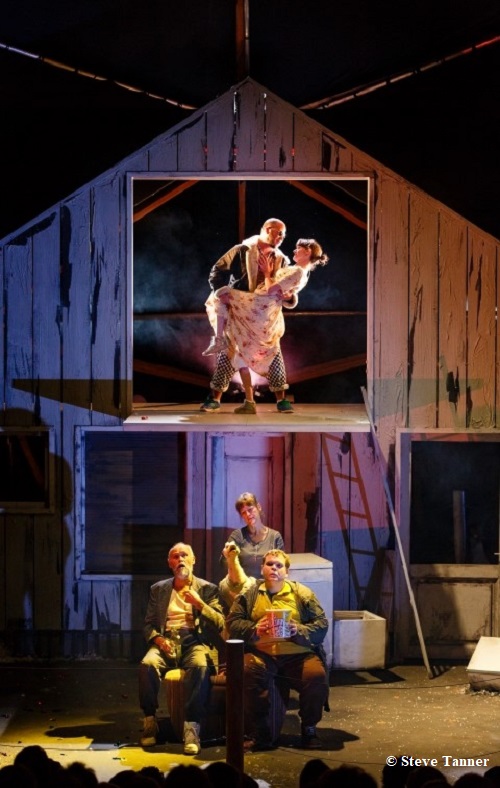 This beguiling, lovingly created play is full of hilarity, underpinned by the sad events and a tension which evolves into menace; Tiny is convinced something monstrous is spying on them. And although Calvin Dean is first class in that role, he nearly outdoes himself in the cameo of a comic postman cum village idiot, until the bravura Keatonish ending. Veteran David Mynne energetically yet effortlessly holds the whole thing together as Grandaddy Jake while the two ladies (beedle dee, dee dee dee), are marvellous in every way and every role. Jenny Beare takes on such a variety, all expertly delivered: Tiny's mother; flirtatious Jackie; efficient doctor; officious cinema attendant etc. And Rachel Leonard is a convincing fusspot and box ticker of a social worker, but has an amazing way with birds, and small boys, bringing Fup and toddler Tiny virtually to life; the over-sized duck, aggressive and affectionate by turn, has to be taught to fly, and she's not the only one.

Like all the best writing for children, there is plenty of entertainment for adults, and quite ribald in places with earthy language, and innuendo, largely courtesy of Jilted Jackie. The show opens in splendid fashion, celebrating the little family's joint birthdays, and the audience is immediately engaged by the bonhomie and jaunty playing of musicians Ben Sutcliffe and Zaid l-Rikabi. And it attracted a huge number of students, which is always good to see, as well as rapturous applause at the end; bet I wasn't the only one with a lump in my throat. Each actor was greeted with acclaim, deservedly uproarious in the case of the duck because it really was fupping amazing.

A most welcome return from Kneehigh – gigantic in reputation, ideas and all matters theatrical.