'War, war! That's all you ever think about, Dick Plantagenet!' has to be the worst opening line for a review; dreadful piece of film dialogue. But a subject damn near as old as the human race is one which presents any number of obstacles for any playwright and any theatre company. We've seen and heard it all a million times; how do you create something different to evoke the pity of war, and all its horrors? And that yearned for homecoming, to comfort and security? Or isolation?

And where to start, with the incredible cast, or the incredible staging? Let's go with the latter, as the cast do, fluidly manipulating a container, rigged out like a gym with nets, ladders and footholds etc. It has an almost farcical number of doors/panels, and the cast are all over it like a first class parkour team, swarming in and out, up and over as the action takes them. 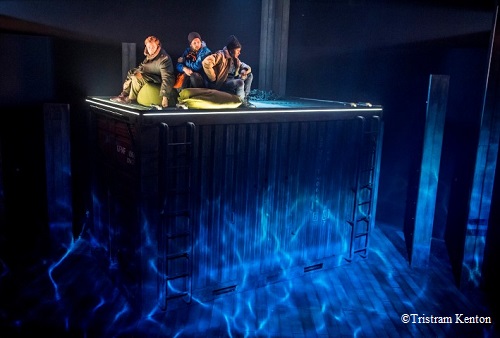 They are expertly choreographed too, utilising dance movement, slow motion and mime to make the most of every scene. The music achingly brings out every nuance of every emotion while lighting ranges from subtle shadow play to the dazzling flash of gunfire. Emanating from columns each side of the container, these are also used as video screens, for a constricted view from inside the trenches. Set and story must be an inspiration for the cast, who have three difficult tales to tell, and difficult to say which is the scarier, the one set just eight years hence, or from five year ago, after the war with Iraq. Most frightening of all, it's from a period of little over 100 years. There have always been wars; there always will be.

Confusing at times, stories interweaving and overlapping, the actors switch action for narration, and characters as swiftly as shape-shifters. But while the ending was not crystal clear, the impact is still stunning. Similarly, the beginning plunges us straight into the middle, which in a way is how it should be: art mimicking war. It takes a little while to get to know the characters, and to differentiate between the two more recent; the dialogue clarifies that in a beleaguered England in 2026, Nat (Jonnie Riordan), brave and determined, is on a quest to find his desperate rebel brother, Finn (Kieton Saunders-Browne). In a huge contrast, Frankie returns home, branded a monster, and monstered in turn by the media. Joe Layton is remarkable, whether tortured soul or unrepentant brute, even more so when turning into Rose, George's bewildered, dutiful and worn out wife. 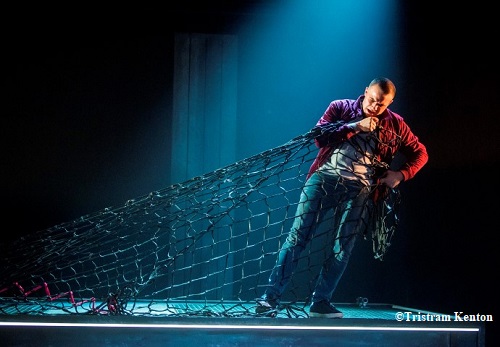 Similarly, Jared Garfield, who brings a world of poignance to the role of the latter, numbed and dumb from shellshock, glitters ominously as Frankie's old mate, Ryan in a chilling scene where his gang of thugs are full of admiration for the atrocities the soldier committed.

You have to admire the ingenuity of this production, with plenty of multi-tasking and multi role-playing. And you have to admire a play which is so intense and impassioned. Yet sometimes an exceptional production is greeted with a stunned silence, although every bit the equivalent of rapturous applause. A thoroughly deserved standing ovation here, surprisingly involved just half the audience, but the other half must surely have been simply too overwhelmed. And once again, it was good to see so many younger people attending; if not on the School Curriculum, it certainly should be.

And I reckon I should be down on the Everyman/Playhouse Christmas list for a new thesaurus – fast running out of superlatives.