The Animals and Children Took to the Streets - Liverpool Playhouse

We're off to a good start, free bags of sweeties being passed around. Or are we? Along with the not so goodies, there's no indication in the notes as to who plays which main role. And the title does not do what it says on the can: no animals appear, apart from one cat. However, easy to imagine the anarchic 1927 Company having a giggle about that. Or simply indulging in a Gallic shrug.

And we're off to the seediest of slums, Bayou Mansions, along with Agnes Eaves (and daughter Evie), and she is full of good intentions despite the horribly grim environment where nobody dares venture out at night because of the feral children swarming everywhere. Agnes is convinced they just need a little love and understanding; the sinister Council has ideas of quite a different nature to solve the problem.

Her love interest, well, he should be so lucky because she really is not interested, is the Caretaker, and the two other main characters are the owner of the Second Hand Shop and her daughter, Zelda, head of a gang of the children, known as the Pirates, their clarion call being 'we want what you have out there'. But it's impossible to tell who plays what, particularly as The Caretaker, with a shock of Struwwelpeter hair, and Robert in 'The Golem' look similar yet are played by different actresses. 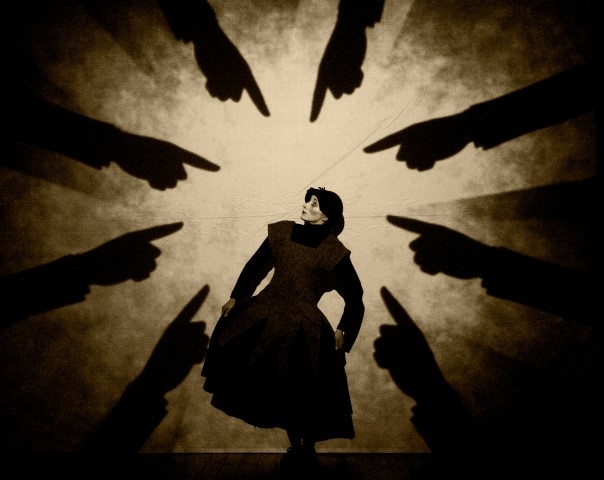 By a process of elimination, Rowena Lennon, I think, is the delightful, demure Agnes as well as naughty Zelda, then perhaps Felicity Sparks is the Caretaker, who, along with Agnes, garners most of our sympathy; both of them stubborn yet reluctantly brave. Which leaves Rowena Lennon, maybe, as the enchantingly roguish Madame Whateverhernamewas, dry wit, dodgy dealer and Molly Parkin lookalike.

The basic design is the facade of the tenements, windows popping up all over the place, and scenes and scenery change at a bewildering pace, sometimes split with each half left and right of the stage. The scattergun switching of images can be confusing; when news headlines are projected on the backdrop, words and letters are every which way making them difficult to read. Again, you suspect this is all done on purpose, so you should just sit back and enjoy the show, admiring the Russian and Parisian influences on what is basically a cartoon or graphic novel brought to life before your very eyes. However, quite a few devices are the same as those in 'The Golem', particularly the animation and the pounding music accompanying the Caretaker when administering silly walks as he marches along or runs around. The whole thing, nevertheless, is startling, and bizarre, and very, very clever with delicious word play and exquisite rhymes, interrupted by the occasionally rude and risqué, and enhanced by wonderfully jaunty music and satirical comment enunciated in cut-glass tones.

Such a vividly original story, created with a loving, old fashioned attention to details, it could easily become a classic. You may not believe you should clap hands if you believe in fairies, but this dystopian fairy tale earned plenty of applause from a thoroughly captivated audience. Think Roald Dahl, think 'Cabaret', think Tim Burton – and just think what you’ll be missing if you don't experience this show for yourself.