Game Over - The Casa, Liverpool

Game Over is a dark musical comedy written and directed by Dave Bain exploring themes of suicide and depression. In aid of the Liverpool Mental Health Consortium, the play is set in Limbo. It tells the story of two men, Steve (Harry Boyd) and Max (Alex Harland) who take their own lives on the same evening. Due to a clerical error Death (Sam Dunning) informs them that he will only be able to sign one of them off as dead and the other must return to his life on Earth. Both men beg to be the one who is allowed to die as their life was so miserable, before Death informs them that they are going to play a game to decide who lives and who dies.

Both Steve and Max begin with five lives and over five rounds they need to try and lose these lives. The first man to lose all of his lives wins and gets to stay dead. The competition will be decided by three judges: the Judge of Fun (Andrew Cunningham), the Judge of Love (Eloise Jones) and the Judge of Industry (Zeina Bain).

With this begins a series of surreal and emotional games, in which Steve and Max will look at all the misery in their lives and what led them to their final decision. 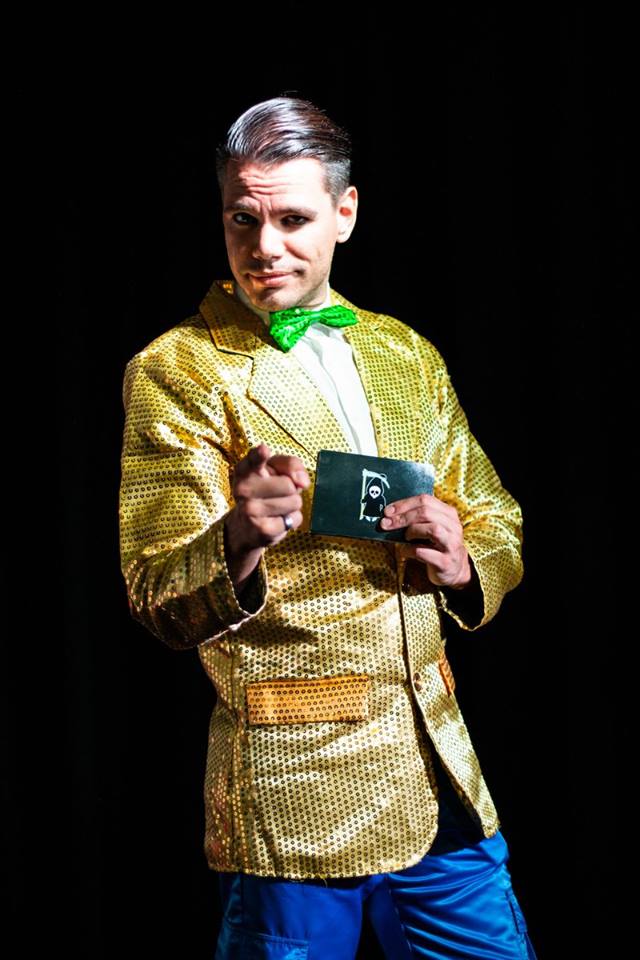 The action begins as soon as you enter the theatre. The audience become the lost souls of Limbo and everyone is handed a card when they enter the theatre telling them what they have lost. The three Judges walked around the audience before the play started talking to people and asking (sometimes personal) questions.

The play begins by showing Max and Steve’s suicides. Max’s is first and is done well using blue lighting and bricks to illustrate his drowning. He arrives in a simply decorated room and begins ringing the service bell for attention. A typical looking grim reaper walks up to the stage before throwing off his costume to reveal the smiling Death dress in brightly coloured clashing clothes. Steve then appears on the stage, with his noose around his neck.

The deaths are presented in a near realist way which is quite shocking, bringing the theme of the play to the forefront of the mind from the start.

The differences between the two men become quickly apparent. Max is a wealthy investment banker who has lost a large amount of money and owes millions of pounds. Steve is a former charity worker who has been unemployed for some time and has begun staying in bed for days.

Max is quite superior, boasting about the high quality of his suit and criticising Death’s gaudy outfit and looking down on Steve. He even views the way that he ended his life as better than Steve’s choice.

The choreography is very good. Death starts a number of musical numbers which Steve and Max are reluctant to sing and dance to. Death forces them using telekinetic puppetry and both Boyd and Harland did a brilliant job of appearing to be forced to dance. As well as fun songs bringing a lightness to the play, a number of tender songs create a poignant atmosphere.

Steve and Max are both quite critical about the ability of the Judges to decide on their fate as their personalities are ironically the opposite of what they are supposed to be judging, but both appreciate when Death points out that they are judging what the two men were bad at, not what they were good at. Cunningham’s deadpan Judge of Fun is wonderfully comical and many of his one liners are some of the funniest points of the show.

Using many tropes for 1980s quiz shows, Game Over is full of glitter and glitz, giving a very glamourous and funny layer to a serious message.

The themes of male mental health are particularly explored with both men using language which is stereotypically aimed at men who are struggling. A lot of their problems are linked to finances and the guilt and feelings of being a burden are common to both stories, which are otherwise very different.

The emotions are very high throughout the performance. Death and the Judge of Love particularly switch between high and low moods very quickly. Steve and Max become extremely angry and aggressive towards each other and Death a number of times. The physical theatre elements are done extremely well.

As the rounds progress and each man loses more and more lives, it quickly becomes apparent that the winner may want to go back to his life after all. Sometimes it might do a lot of good just to have someone to talk to, even if that’s a narcissistic grim reaper and a trio of dysfunctional judges.

You can find out more about Game Over on the website http://www.gameovertheplay.com/