‘Still Alice’ is a novel originally written by Lisa Genova which depicts the story of a 50 year old woman receiving the difficult diagnosis of early onset dementia. The book which was published in 2009 was a roaring success and quickly became a best seller which has since been sold in 30 countries and translated into more than 20 languages. In 2014, it was adapted into a film starring Julianne Moore, who went on to receive an Oscar for her role of ‘Alice’. Today, Playhouse Theatre Liverpool has the pleasure of hosting this touring production during the British premier of the stage version of ‘Still Alice’ and it is clear from the onset that this influential story triumphs on stage, just as it did on paper and in the cinema.

Alice (Sharon Small) and her husband John (Martin Marquez) are successful professors at Harvard University. Alice lives for science and leads a very busy life, travelling around the world for lectures and research. They have two children, Thomas (Mark Armstrong) who is a layer and Lydia (Ruth Ollman) who, much to her mother’s disfavour, is an aspiring actor. This play adaption, written by Christine Mary Dunford, introduces another character ‘herself’ (Eva Hope) who acts as Alice’s inner voice. 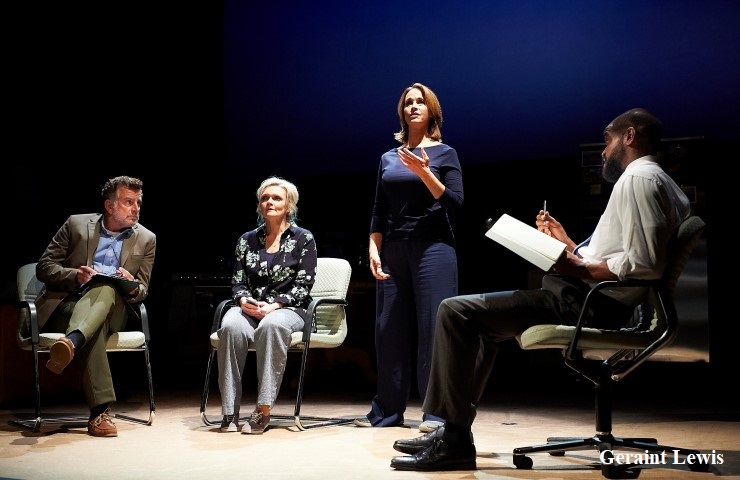 She communicates with Alice throughout the production but cannot be seen or heard by any of the other characters on stage. This relationship is very powerful and engaging as the audience get an insight into Alice’s battle with herself in a quite literal way. What is quite potent is how this relationship changes over time so that by the end of the production, the engagement between Alice and ‘herself’ has faded and decreased significantly, pertinent to the deterioration of Alice’s memory as the dementia progresses.

This production has been excellently cast with stellar performances from all of the performers and Sharon Small in particular making a huge impact in her portrayal of ‘Alice’. This talented actress managed to create a physically powerful decline in a gradual sense that was simply effortless and incredibly natural. Sharon Small’s performance and in fact all of the performances are so real that you are compelled to feel every emotion that this show gives. Watching the change in the relationship between Alice and her beloved husband John is heart breaking and the audience become highly sympathetic to the whole family circle as their lives shatter facing the challenges of this complicated disease.

David Grindley must be applauded for his clever direction as the overall production is respectful, open, honest but also quite beautiful. The passing of time and the loss of memory is entirely captured through the use of slow movement and removal of set. This gives a very ‘drifting’ feeling which is in keeping with Alice’s disease progression. By the end of the show, it was difficult to remember that only 90 minutes previous, Alice had been a bouncing, thriving professional woman of the world as she had since fallen apart under our noses in a rather subtle and graceful way.

As dementia is touching our lives more and more every day, this production serves a wonderful purpose in bringing forward the understanding of dementia and in particular the way emotion still registers in those who have lost their memory. Alice didn’t often remember who people were or know what they were saying but she could always sense and recognise emotion so that at the end of the production, she appears quite lost but knows she is happy in the moment. This is a key message for everyone who is connecting with those who have dementia.

Congratulations to the cast and crew of ‘Still Alice’ in their creation of an extraordinary piece of theatre. This play is quite serious and emotive, sometimes even distressing to watch but it is highly memorable and this story is one everyone needs to hear.