You wait ages for a puppet show to come along and then three come along at once. Well, two actually, both filming puppets, adding special effects, and projecting the result in real time onto a screen above the stage. The first was The Missing Light by Make, Do and Mend – a simple tale, beautifully without words, with wooden puppets and a range of props and settings.

The second was The Paper Cinema, using a similar technique but with numerous pen and ink cardboard puppets to tell the extremely complex, character-driven tale of Macbeth. And thereby hangs a tale. 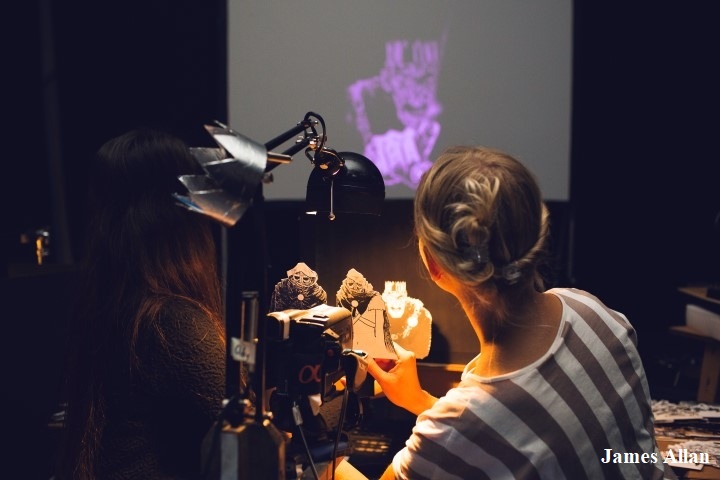 Regarding the characters, we see them first as a parade of the cast. Indeed, the puppets are beautifully drawn in black and white, with many versions of the same character to display different poses and expressions, all extremely vivid and dynamic. Similarly, the scenery is illustrated in meticulously drawn black and white images of the Scottish landscape. Nor is there any denying the incredible skill of the puppeteers, whose organisation and manipulation of the puppets and props is remarkable, as are the music and sound effects, provided by the extremely talented Christopher Reed and Francesca Simmons.

But Macbeth is not a play of black and white, and the characters have far more depth than can be conveyed by two-dimensional cut outs. Macbeth is driven by ambition to commit evil, but we cannot explore the wrestling with his conscience, the influence of Lady Macbeth, the ambiguous role of the witches – do they predict or do they motivate? And while a picture may be worth a thousand words, that does not apply when the words are Shakespeare’s. An image of Macbeth looking distraught and exhausted is no substitute for the voice that cries “Sleep no more!/ Macbeth does murder sleep', the innocent sleep/ Sleep that knits up the ravell'd sleeve of care” with the repetition signalling to the audience the importance of this theme – echoed later in the play with Lady Macbeth’s sleep walking. Irrespective of the loss of the poetry, without the language, the play becomes merely a sequence of events, and even some of those are difficult to understand given the limitations of the format, such as Macbeth’s motivation for murdering Banquo and MacDuff’s family, his faith in his invincibility as ‘none born of woman will harm Macbeth’, the significance of Birnam wood etc.

So, while the skill, the artistry, and performance are stunning, and make for an interesting evening, they do not compensate for what is lost, and both they and the play suffer from the mismatch.