If you think of ground-breaking musicians then the likes of Ornette Coleman and the Velvet Underground spring to mind. Look back a little further – well, over a hundred years actually – and you discover Arnold Schoenberg, considered by many as the father of modern music, and whose Pierrot Lunaire is one of the most controversial and polarising pieces of music ever written: in the words of Manchester Collective’s Managing Director, Adam Szabo, it’s a nasty piece of work.

A cycle of twenty-one songs, in three groups of seven, it marries a selection of poems from the collection of the same name written by the Belgian poet Albert Giraud about madness, death, sex, dreams, and trauma, to short, abrasive, atonal pieces of music written by Schoenberg.

The evening was split into two halves: the first half, led by NTS/BBC 6 Music presenter Elizabeth Alker, was an exploration of the background and themes of Pierrot Lunaire which took us back to 1912 Vienna, a place of extravagance and decadence renowned for its art and culture. It also stood at the heart of an Empire falling apart with issues such as social deprivation, working class unrest, and homelessness to the fore – ring any bells? – providing the perfect backdrop to explore the themes of darkness, violence, and mental fragility. 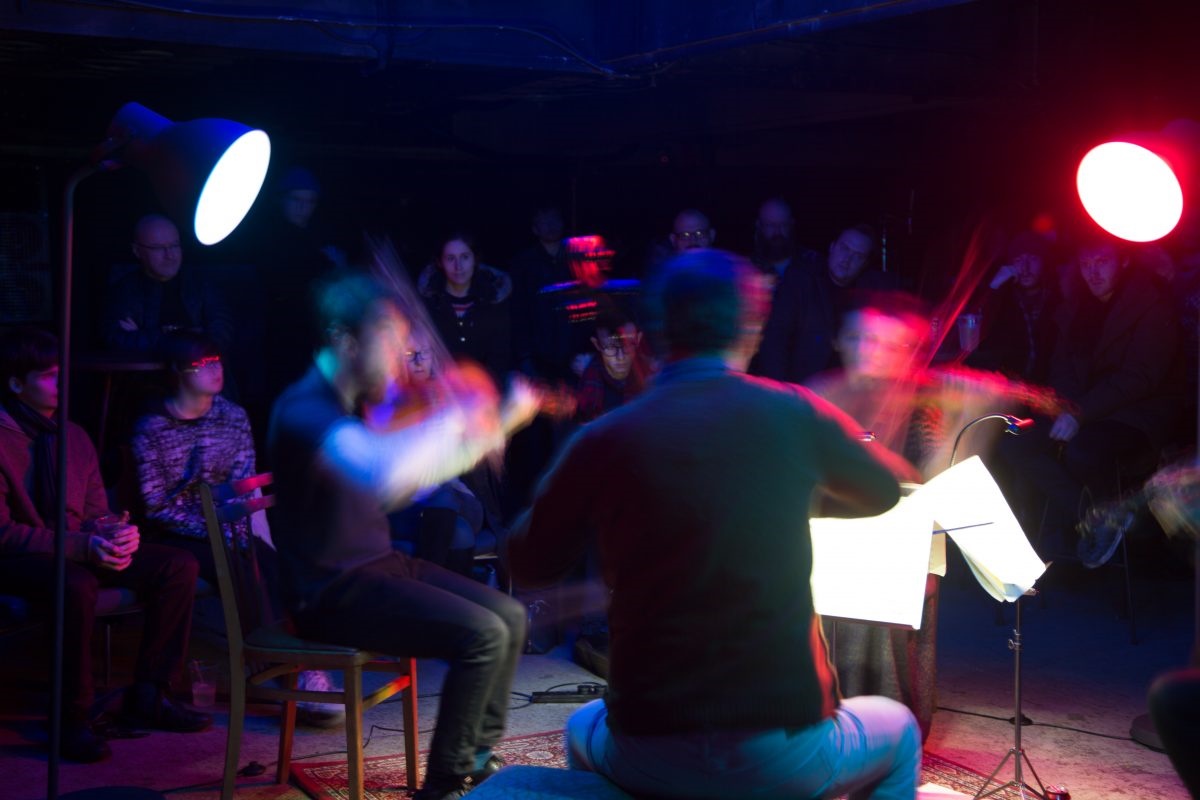 The poems present numerous characters which include the eponymous Pierrot, the sad clown, and Columbina, the servant girl whom he pines after. With the piece written for a solo singer, director Emma Doherty chose to present the various characters as different personalities of the song cycle’s narrator, playing out through one tempestuous night.

Conductor Timothy Burke highlighted Schoenberg’s reaction against the traditional use of melody and harmony whose beauty would not serve the purposes of a piece influenced by the power of the unconscious and Freud’s developing ideas on psychoanalysis. With some valuable support from the ensemble consisting of flute, piano, clarinet, cello, and violin (no names unfortunately), Burke illustrated the alternate approaches to a musical journey from the traditional straight melody with resolution provided by underlying chords through to the dissonance of this piece further enhanced by the vocal performance style of ‘Sprechstimme’ – a halfway place between singing and speech – with Schoenberg’s use of atonality serving to paint a truer picture of the violent, religious, and sexual imagery at play.

And so, to the full performance. The set was minimal with a double bed occupying centre stage, a spherical white lightshade suspended above it to reflect the moon which influences the mood and behaviour of Pierrot whose love for Columbina remains unrequited. The ensemble was arranged around the bed upon which lay mezzo-soprano Lotte Betts-Dean, frantically leafing through a book, struggling to sleep. As the cycle of twenty-one songs unravelled, Betts-Dean’s Sprechstimme performance highlighted the instability of her character, someone on the edge, whether that subconscious realm between sleep and awake that we all experience from time to time, or the darker edge between sanity and madness. The difference in characters were well portrayed through her movements around the stage with her unnerving stares directly into the audience complemented by her range of tone and pitch. The ensemble played with aplomb and I particularly enjoyed their interactions with Betts-Dean at crucial moments in the piece. The use of an English translation by librettist David Pountney allowed us to follow the haunting lines until relief is provided by the morning sun and the character’s depression subsides.

Manchester Collective’s mission is to create radical, human experiences through music, for everyone. They certainly achieved that this evening. Further information at https://manchestercollective.co.uk/

The Invisible Wind Factory is ‘a cultural theme park of the future’ – an ever-developing destination for visitors, artists, and tourists. Further details at http://thekazimier.co.uk/