The Casa Theatre Liverpool has the pleasure of hosting ‘The Bench’ presented by David Armstrong Productions. The Bench is a combination of three 30-minute plays all revolving around a park bench. The Casa Bar and Venue has a busy, buzzing bar at the front, with a cosy, quaint theatre down the back that attracts a wide ranged audience. The intimate setting makes it the perfect venue for what ‘The Bench’ has to offer to a full Liverpool audience this Saturday night.

The first play “Love” depicts a story based around an elderly married couple. The pair sit and retell stories from their childhood and insight the audience of what life was like for them growing up during the war. This play was the first of the three to bring forward some strong themes including death, love and the afterlife. The script was quite narrative which was great for the audience as we got to relive the story in full detail however, I sometimes felt that this took away from the credibility that this married couple were having a natural conversation. 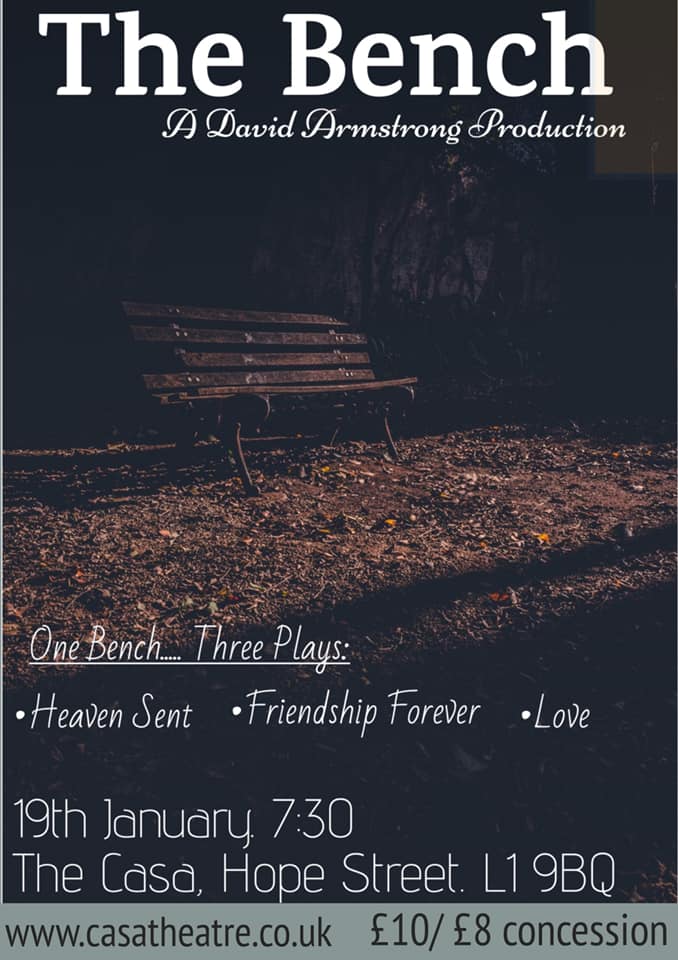 That being said, the play was enjoyable, and the actors characterised excellently making use of facial expressions and hand gestures to convict age and fragility. The play had a twist at the end which came as an interesting surprise and changed the overall perspective of this piece. Audio clips and lighting were cleverly used to enhance the overall production.

The second piece, called “Heaven Sent”, was quite different but also brought forward a great deal of challenging themes including suicide, cancer, pregnancy, drug and alcohol abuse and death. There was a little more mystery with this play from the start which engaged the audience and created a level of curiosity. There were some poignant moments in this piece, beautifully portrayed with real tears and emotion. An interesting line in this play was when Bethany realised that the man she had been talking to was not who she thought he was and she apologised for her inappropriate and rude behaviour because of this. It got me and maybe some other audience members thinking about how people may change their behaviour simply because of what a person looks like. It definitely reminds us that things are not always as they seem and to be kind to everyone.

The third and final play tonight was entitled “Friendship Forever” and if you thought ‘The Bench’ couldn’t cover any more difficult topics, you were wrong! The story see’s two childhood friends catching up after 45 years apart. The story brings topics of heartbreak, loss and gender identify to the fore in an endearing story of love, loyalty and friendship. This play brought some much needed comedy to the overall production and left the audience smiling as they left the theatre. The set was stagnant throughout and the director has stripped things back completely by only using a bench and limited props. This meant the dynamics of this production truly depended on the script and the acting which makes ‘The Bench’ a perfect night out if you are interested in new writing and fresh drama. In my opinion, ‘The Bench’ is not quite ‘entertainment for the masses’ and the simple style left the production at risk of being a little too plain and lacking vibrancy. However, I am not sure it is the aim for ‘The Bench’ to be vibrant and this company must be applauded for bringing something quite new and different to Liverpool Theatre. Congratulations to the cast, crew and whole company for showcasing some real talent but mostly for sharing and discussing important issues and themes in a natural and artistic manner.