With current news headlines underlining the importance of having a state, and the debate about Shamima Begum has highlighted how making someone stateless is illegal under international law. But what if someone deliberately chooses to reject their nationality, to become stateless? That was the issue that puzzled Chris Thorpe following the result of referendum in 2016. An incident in Kosovo involving a violent confrontation with two policemen had already led him to ponder what it was about being British, with the weight of empire and privilege, that led to him being treated differently, but while he may claim that the show is ‘not a Brexit show’ clearly, this was the spark that ignited his thoughts on what it means to belong to a particular state, to have a national identity. 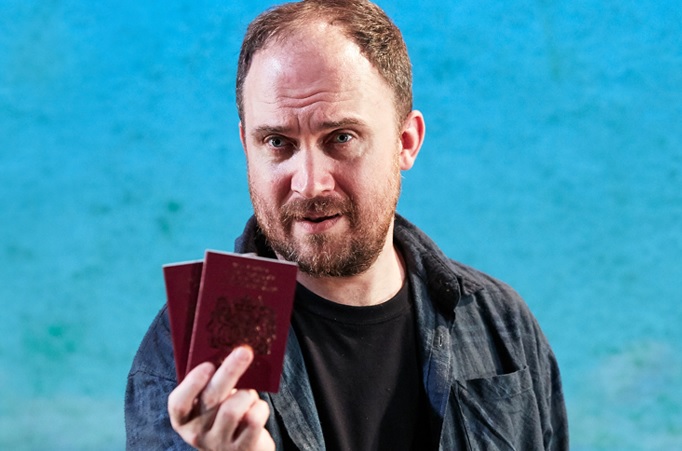 In collaboration with director Rachel Chavkin, who also worked with him in 2014 on the acclaimed show Confirmation, in Status, Chris takes a quotation by Theresa May, ‘If you believe you are a citizen of the world, you’re a citizen of nowhere’ as the starting point for the second in what will be a trilogy of plays that explore what the programme notes state is ‘the intersection between our individual humanity and our politics.’

In this show, the exploration takes the protagonist, Chris, whom Thorpe claims not only is not him but, indeed, is someone he isn’t even sure he likes, on a journey in response to the urge to escape from the country he feels he no longer recognises. During the sometimes surreal odyssey, through monologue and song, and complemented by animation on the screen behind Chris by video designer Andrzej Goulding, we learn not only Chris’ thoughts on identity, but we also learn how other nations define themselves and their attitudes towards the artificial borders drawn on the geography that divide one nation from another but that can change overnight, about what divides us and what unites us. He raises the question of whether we are born with a nationality, and of how we respond to the request to ‘Write down what you mean when you say you are from your country’.

While it might sound very intense – and, indeed, it is – with Chris’ skills as a story teller, with flashes of humour and punctuated by songs on the electric guitar, it makes for gripping theatre, raising questions that each of us has to face increasingly in today’s world of identify politics and globalisation