Always read the small print...Because this is Joseph Conrad's classic, 'retold for today', and it opens, startlingly, with journalist Gitta Sereny interviewing Franz Stangl in 1970, the Commandant of Treblinka and Sobibor. She is known for coining the phrase 'the banality of evil', apparently suggesting that one may do evil without being evil, but another interpretation is that once evil becomes commonplace, an everyday occurrence, the risk is that people take it so much granted, no attempt is made to prevent or overcome it. In this vividly inventive adaptation, the heart of darkness is not found in Africa. It originated in Europe.

And if you expect the curtain to rise on a boat or a river and a desolate landscape, you're in for another shock because the stage is set...as a stage, where the action is being filmed. It's virtually bare, just a couple of tables and chairs, cameras and video screens, backed by a green scene. Not only that, if you're racking your brains, trying to remember the story, a synopsis is provided at one point. The format may be sort of 'play within a play', but there's more of a twist than book within a film within a play, incorporating considerable analysis of the text and discussions about such themes as racism, colonialisation and capitalism. 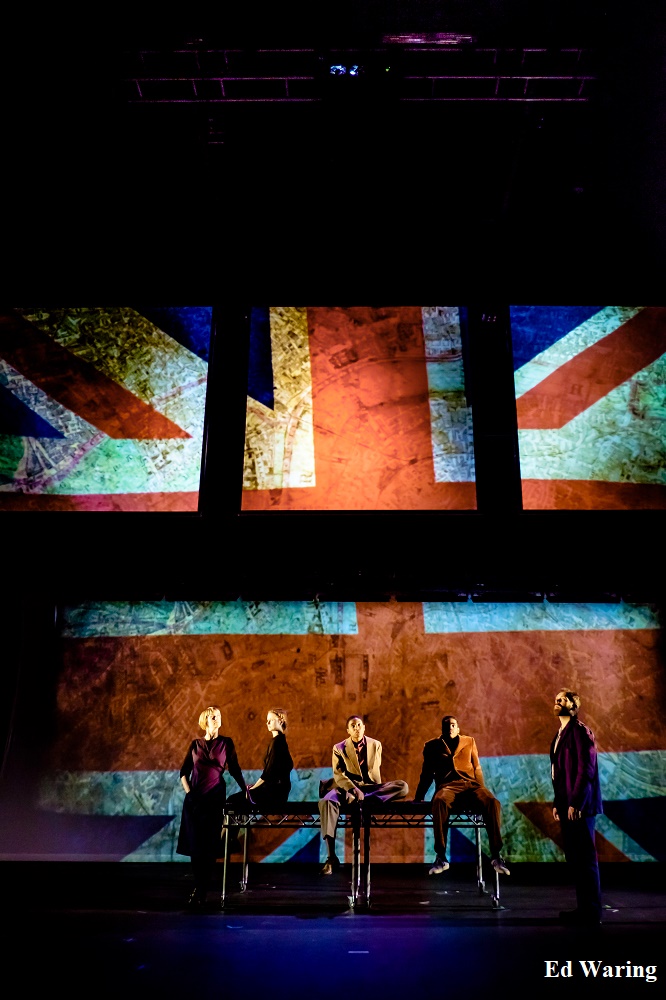 And the best way to play it, so to speak. It is possible the intention here is to introduce some humour as balance to the dreadful atrocities, not just those witnessed by Marlow, but the ones the world has witnessed. Part graphic novel in fact, and part documentary, with vintage footage and close ups, such as Stangl's, being projected, along with excerpts from Apocalypse Now. However, although the cast wrangling over the finer details has its funny moments (zombie movie?), more importantly, the production is clarified, with the reasons choices have been made, such as setting it in Europe, Marlow heading from Kinshasa to try and find Kurtz in London, the lead character a black women, who is, of course, a private detective.

At times, though, it becomes so busy, focus is lost, particularly due to incongruities when the voiceover describes actions which are not replicated by the cast, although usually minor details such as gestures. More annoying is the poor lip syncing on the video screens. But the actors themselves cannot be faulted, live or filmed, and those screens frequently show extreme close ups. Keicha Greenidge makes an intrepid, dedicated heroine, with Laura Atherton and Morven Macbeth mostly behind the scenes, providing the voiceover and stage directions, then coming powerfully to life to portray, for example, The Russian and the Resistance Leader respectively. Morgan Bailey puts in an extremely adept and adroit performance, whether making suggestions and comments backstage as it were, to making moves on Marlowe as Davis or making us all wonder as the mysterious Man, giving her the job of bringing Kurtz in, most versatile of all is Matt Prendergast, as Stengl and Oberg amongst others. He is also Marlowe's dogged, taciturn driver, Berensdorf, and Kurtz himself in what felt like a rather drawn out scene. Ironically, in his role as the fervid, furious Minister, he seemed as much of a villain, although his Kurtz is so calm and reasonable, in itself, almost unspeakably chilling.

A radical interpretation then; an almost Kafkaesque deconstruction of the novel which eventually does make sense in an amazing production. Join Imitating the Dog on this remarkable journey and you will not be disappointed.