In 2017, Mildred Hubble and her friends got a revamped TV show, so surely it’s time for a stage show too?!

The Worst Witch, is based on the books written by Jill Murphy and both TV shows under the same name.

We meet students and faculty from Miss Cackle’s Academy for witches as the Fifth years are putting on a play about their adventures in First year. It’s written by the main character, Mildred Hubble and stars her classmates, Maud, Ethel, Enid (Emma Lau) and Druscilla (Meg Fogan) and also her teachers Miss Hardbroom, Miss Cackle, Miss Bat and Miss Drill. It starts with the girls very first day, when they’re making their way to the Academy and realise too late that Mildred isn’t a witch and shouldn’t be there. 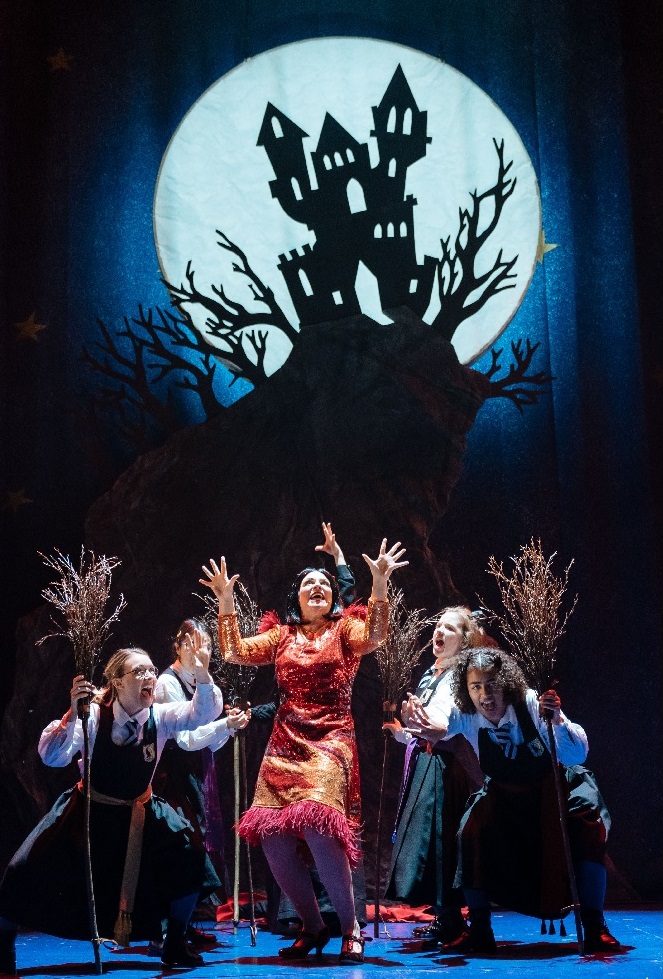 She hides this fact from her teachers, but early on gets rumbled by Miss Hardbroom, who is all for erasing her memories and excluding her, however Miss Cackle empathises with Mildred and allows her to stay, so long as she proves herself and works hard in every class. But Mildred, being Mildred, encounters some problems (and Ethel) along the way but with the help of her friends Maud and Enid, they manage to save the day, and the world at the same time!

This nine member ensemble (usually 10, but Anna Crichlow was indisposed) all worked hard to bring these already established characters to life. With the teachers (bar Miss Cackle) and Ethel and Mildred walking round the auditorium before the show, already in character, they also showed willingness to take photos with the children in the audience, even Miss Hardbroom, whilst still being in character. Molly-Grace Cutler (Miss Bat), Megan Leigh Mason (Miss Drill) and Meg Forgan (Druscilla) also doubled as the musicians, without retracting from the story. Danielle Bird was heart-warming and endearing as Mildred Hubble, and played well off the other characters, especially Rachel Heaton as prim and proper Miss Hardbroom and Polly Lister as the engaging Miss Cackle.

The set, by Simon Daw was clever and well put together. The scenes set inside the school, showed the shape of the school that we saw during exterior scenes and make you think of somewhere you’d find a witch or two. Theresa Heskins’ direction made the show flow easily and made it thoroughly enjoyable to watch!

When you think of The Worst Witch, you think of a children’s story – however this adaptation was fun for all ages, with something for everyone to enjoy!