Misunderstood, written by Barbara Phillips, is a story about the importance of communication and how the lack of it can lead to chaos galore.

Leila, Kelly and Patsy are three sisters working in a beauty salon. Leila’s husband Nathan has been unemployed for a while, so he has become the main carer of their three children. Kelly and her husband Peter are both working, but also claiming benefits. Living beyond their means has left them with mountains of debt which they are struggling to pay. Patsy, on the other hand, in living the high life. Her husband Ritchie is rolling in money, though it all comes from a life of crime.

When Patsy offers Leila a promotion to salon manager, Nathan is left reeling by feelings of emasculation. The resulting fall out leads to the breakdown of their relationship, so Nathan reluctantly turns to Ritchie for work in an attempt to impress Leila with his ability to provide for their family. 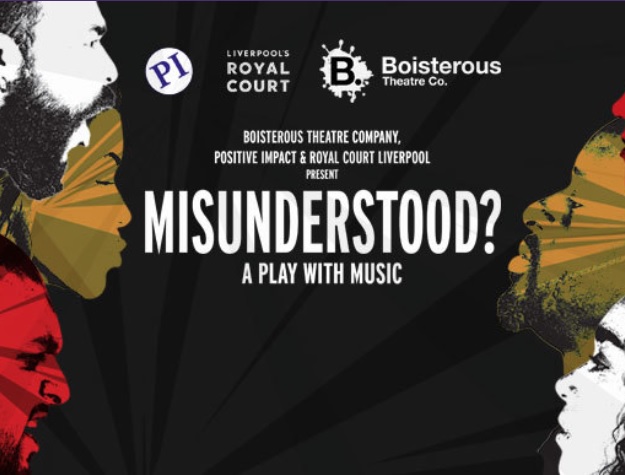 Meanwhile, Peter’s constant clandestine disappearances to the job centre have Ritchie questioning his loyalty. As all three men start to get the feeling they’re being followed, tensions rise, and no one trusts anyone anymore.

The women talk through their problems in the salon and the men have a couple of heart to hearts, but until the couples sit down and talk things through themselves, it looks like the misunderstandings will just keep piling up. Will the three couples ever clear the air?

The play features a very funny narrator who relates details of the story in rhyming verse. He also performs some of the various songs which feature in the piece. The elements of physical comedy the narrator employs are particularly good and provide many laugh out loud moments in the show.

The songs sung throughout emphasises the emotions of the characters. One Man Band, performed by Leila and Nathan, is especially poignant and makes both characters very sympathetic and real.

The play explores themes of mental health, benefit fraud, poverty and gender roles. Ritchie’s old-fashioned views of women influence the actions of Nathan and drive much of the story forward. Ritchie is a relatively simple character which prevents his outdated opinions being too offensive and bringing the mood of the play down.

The web of lies and deceit the characters get caught in remains light-hearted, but the cast are still able to create a sense of peril and pressure. As each of them gets closer to what they think is the truth about the others, the feeling of panic the characters have is palpable. The narrator reminds the audience that everything could be resolved if people would just talk to each other instead of about each other.

Wonderfully performed, by a cast of very talented actors with great chemistry between them, this is a very funny and entertaining piece of theatre, which like all the best comedies, has a core of seriousness.

Misundertood is being performed at the Royal Court until 8th June 2019. Tickets are available here https://liverpoolsroyalcourt.com/whats-on/misunderstood/