And just who is the idiot? The amiable, artless Will (Samuel Pope), who gets his girlfriend pregnant and ends up stuck at home? The one who escapes to the big city and becomes trapped by drugs? Or the third one, who's unlucky enough to join the army and lose a leg (and has a lobotomy; ok, the song title is a clue if not the plot)?

Yes, we know, it's all of the US of A (closely followed these days by us...), in a show of furious energy mixed with stoner drop outs against a background of squalor, frustration and despair. As my companion says, with cast and staging, it's Beavis and Butthead meets West Side Story.

All the same, amazing songs, amazing set: gantries, wire fences and ladders, even a precariously balanced sofa. It leaves little space to manoeuvre, and everybody seems to be teetering on the edge. Bit like the story basically, which just about scrapes 2 stars, to be honest; one twist in the plot is more a case of making its mind up where to go, following the unlikely pairing of scrawny loser with fantastic femme fatale, because she thinks he's cute..., 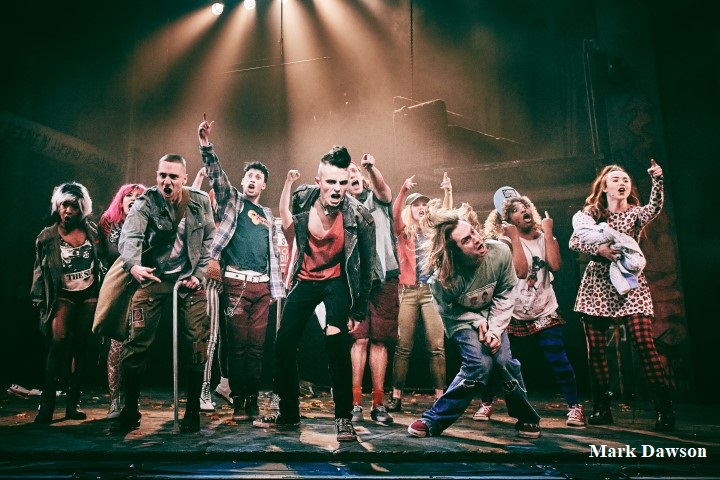 Moving on, not only is the band terrific, but the cast includes many talented musicians, along with incredible dancers and glorious singers. Perhaps surprisingly, however, despite so many of the songs being infectiously rousing, there is very little humour to contrast with lashings of doom and gloom. Nonetheless, stand out scenes, even if sometimes shoehorned in, include Holiday, the initial bus journey, full of hope and expectation, a TV showing of Favourite Son (Ross William Wild), with a chorus line of cheerleaders out front, and Extraordinary Girl, when Tunny (a passionate Joshua Bowen), lost in a fever dream, is exquisitely serenaded by his nurse (Raquel Jones), complete with huge angel wings. Stand out voices, well, all of them, but in particular, single mother, Heather (Siobhan O'Driscoll) and the glamorous siren, er, Whatshername (an amazing performance from Sam Lavery). But antihero Johnny (Tom Milner, all grins and jitters) strikes you as such a pathetic figure, it sends a powerful message, making it very clear: the drugs don't work.

Obviously, the music is full on, raising the roof even if the plot remains pretty much clogged down, with three lads setting off to seek their fortune, post 9/11. Plenty of songs to choose from, especially as Green Day hits range from rousing anthems to poignant ballads; When September Comes is extremely moving but sadly, Boulevard of Broken Dreams is marred by what appears to be a bunch of muppets prancing around in the background. And then, something of a Reality Show happy ending and the trio's reunion, Johnny apparently recovering overnight. Equally disconcerting, when the split comes with hig girl, it's not because of the realisation he is a junkie but after she is unfaithful with his villainous best friend, St Jimmy (Luke Friend), relishing being the real bad boy, then paying for his sins.

The epitome of Sex and Drugs and Rock n' Roll, I did wonder whether this show belonged elsewhere in a bigger theatre but it works well in a more intimate setting, true to its punk sensibilities. And a rapturous evening's entertainment (with a splendid 10th Anniversary souvenir progamme), which garners a new, young and enthusiastic audience along with the older members who may well have fond memories anyway (not being the 60s) – so can I get a loud Amen? Until 13th July https://www.everymanplayhouse.com/whats-on/american-idiot