The Shut Down - Unity Theatre

The Shut Down, presented by 20 Stories High and Kitchen Sink Live, is a show about young people’s reaction to their youth centre being closed down due to lack of funding. Exploring a myriad of themes including physical abuse, grief, self-esteem, popularity and homophobia, the play is directed by Abby Melia and Bradley Thompson, and written by the cast themselves. The show incorporates original music, interpretative dance and poetry to tell stories which are sadly very relevant up and down the country.

The set of the play is very colourful, employing a lurid palette for the beanbags and chairs placed around the stage, and the graffitied flats spelling out the words “Youth Power”. Musical instruments and microphones complete the youth centre with everything together nodding towards a creative and fresh looking atmosphere.

The play mainly consisted of interrelated vignettes during which small groups would speak about the various issues their characters were facing. These were interspersed with poetry, music and dance, creating a multidisciplinary effect which allowed each member of the cast to show their strengths. 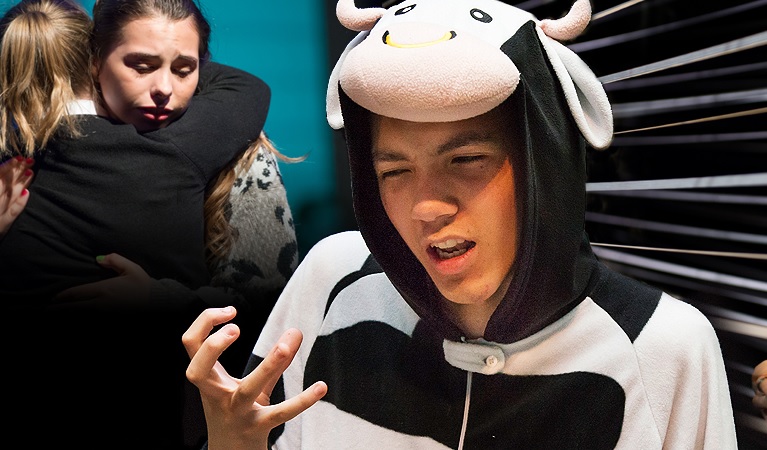 There were some very emotional parts of the show. Cameron’s descriptions of physical abuse at home were particularly poignant. The poetry was very good, particularly the exploration of what it takes and what it means to be popular and the heartfelt description of life when a loved one has terminal cancer.

Social media played a large part in the story, the cast often incorporating phones into their performance and their efforts to save their youth centre being streamed live on YouTube. The effects of social media on mental health were nodded to, without being too invasive, acknowledging the issues which can be caused, whilst also accepting the good that social media can do.

The performances were very naturalistic and unfortunately, on occasion this was detrimental to the show as a whole. The cast were often speaking to each other at normal volume rather than projecting into the audience and lines delivered upstage were completely inaudible. However, they deserve praise for continuing professionally regardless of several disruptive audience members who were talking on numerous occasions throughout the performance.

This is a positive story, and while there are some instances of bullying and bad mouthing, on the whole the characters in the play were very supportive of each other and the atmosphere in the youth centre was uplifting. This may seem unrealistic, but it is very clear that this is a close knit and hardworking cast who have created this piece based on their own real life experiences.

Perhaps, in these turbulent times, from this we can find some hope for the future.

The Shut Down is being performed at the Unity Theatre until 27th July 2019. Tickets are available here https://www.unitytheatreliverpool.co.uk/whats-on/shut-down-19.html