That famed Shakespearian proverb lamenting the complicated, confusing and frustrating path to love which we all follow is uttered within the first scene of A Midsummer Night’s Dream, immediately letting us know that we’re embarking on a tempestuous journey.

As Lysander attempted to win over the affections of his love Hermia, imploringly telling of how ‘the course of true love never did run smooth’ last night on the grounds of Knowsley Hall, it was clear we were in store for a magical evening.

The Lord Chamberlain’s Men Theatre Company have been touring consistently for the past 15 years, presenting open air productions of classic theatre pieces over the summer months, skilfully balancing faithfulness to the material with adding their own creative flair. Taking place within the opulent confines of some of Europe’s finest stately homes and historical venues the group performs in a traditional manner true to the style of early modern theatre, which means this is an all-male ensemble and they rely solely on their ability to project their voice across the open space. 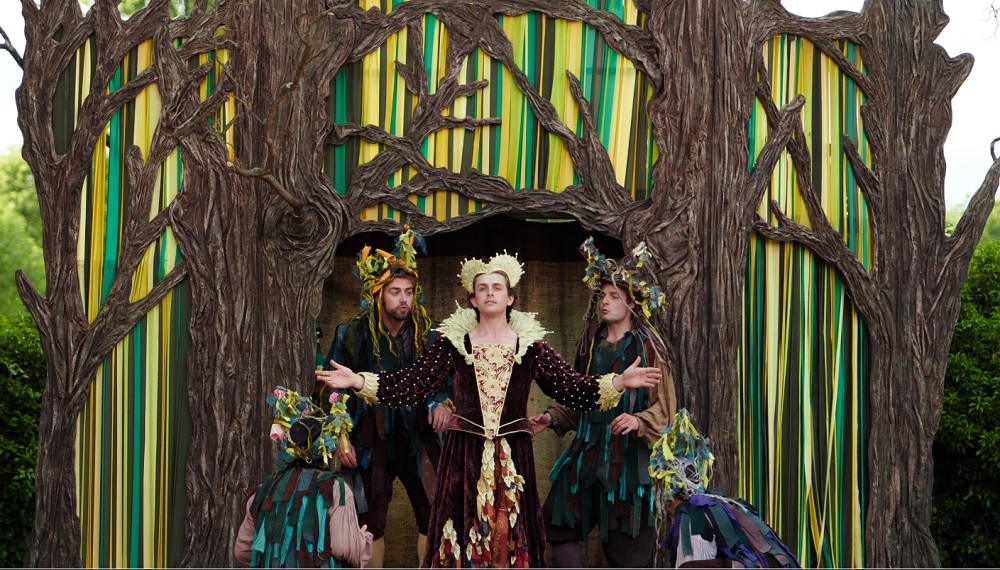 There is a certain apprehension when seeing theatre of this kind that it will be spent largely straining to follow along, as the actors fall into varying degrees of discernibility, but this is definitely not the case here. Each cast member is impressively adept at projecting their voices throughout the show so that each scene rings out clear and audible. This was a consistency which allowed the audience to relax into the production and be swept away. The costume design by Morgan Brind was fantastic, its intricate designs bringing attention to the Elizabethan origins of the play while also simply providing some fun aesthetics for the audience to marvel at. In addition, the costumes were well used as world building tools, where we could see clear demarcations between the Elizabethan reconstructions for the Athenians and the earthier woodland attire worn by the fairies, suggesting worlds which are both removed and tethered.

The all-male ensemble were equally as remarkable, with each member being cast in at least two roles their technical skill was on clear display as they began to deftly transform into these wildly different characters. Their energy was consistently high throughout and served to create a performance which was equally as compelling as it was charming. The actors’ ability to convey gender through their physicality was especially enjoyable, as too often these performances can feel gimmicky. This manifestation of gender was particularly noticeable in Will de Renzy Martin’s portrayal of Titania the Queen of the Fairies whereupon he elegantly played with branches and set pieces as he moved across the stage, conveying both the Queens femininity and her ethereal quality.

This play is one of Shakespeare’s works of comedy and the humour certainly does not fall by the wayside. The cast is spectacular at hitting these comedic notes but the play-within-a-play scene towards the end of the second act is where it reaches its peak. We have now become familiar with the craftsmen-turned -amateur artists, one part of the plot’s four interconnecting stories, and as they perform their show for King Theseus and Queen Hippolyta our familiarity with their eccentricities make it all the more amusing as they blunder through their performance. The physical comedy on display was exceptionally entertaining with their combined energy during this particular scene being reminiscent of a Monty Python bit.

A Midsummer Night’s Dream undoubtedly benefits from an open air setting, with its story of woodland creatures, changelings, and fantastical adventures. The set design here was minimal but the outdoor experience was thrilling as the trees bordering the open field towered above the stage. Through the use of shrewdly placed lanterns as the sun began to set the actors’ silhouettes were projected so that during the final scenes, as the fairies danced to their pavane so did their immense shadows against the trees. It all worked to create a highly atmospheric and otherworldly evening.

The Lord Chamberlain’s Men will be continuing their tour across the UK until September 1st.