There are many individuals who say that they don’t like Shakespeare, and this is often caused by people taking it too seriously and forgetting why he wrote the plays he did in the first place – to entertain as many people as possible. Woolton Drama Group’s interpretation of A Midsummer Night’s Dream, directed by Paul Arends, with musical direction by Sarah Garvey, has genuinely captured the fun and amusement of the Bard’s magical forest comedy.

The audience are enthusiastically welcomed to the wedding celebrations by Duke Theseus himself (Paul Arends), Mrs Quince (Seonnie Sergeant) and Nick Bottom (Peter Andrew). Alex Windrow plays piano as the three happily welcome their guests and learn more about them. This was a very fun touch which created an atmosphere from the outset. 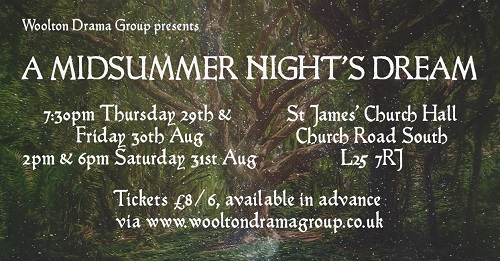 The play itself opens with a song from Robin Goodfellow, a Puck (Holly Windrow) which produces a magical feeling before the confusion of the main action begins. The song is soon followed by Egea (Samra Uddin) pushing her problems onto Theseus. Egea has given Demetrius (James Stephenson) permission to marry her daughter Hermia (Maddie Silverman), but Hermia is in love with Lysander (David Jeffery). Egea is insistent and declares that Hermia must marry Demetrius or die. Theseus lessens the death sentence but still insists upon her marrying Demetrius and giving up Lysander, leading to the forbidden lovers to run away to the forest to escape Athenian law.

Meanwhile, the Mechanicals are casting their play, Pyramus and Thisbe, rich in lamentable comedy and cruel tragedy, in the hope that they can perform at Theseus’ wedding. Getting in the way of Titania (Lydia Windrow), the fairy queen, leads to Bottom being cursed by Puck and turned (literally) into an ass. But Oberon (Zoran Blackie) has cast his own spell on Titania, who falls promptly in love with Bottom, long ears, tail and all.

Add to that the lovesick Helena (Sarah Garvey) who is pining for the disinterested Dimetrius along with miscast spells which lead to even more confusion, and you soon have chaos galore.

The play was performed in imaginative and inventive costume, leaning towards the flamboyant in many cases. The fairy and Pyramus and Thisbe costumes were particular good, with the latter adding to much of the comedy in the show.

The fourth wall was completely shattered with the audience being spoken to throughout the play and on occasion participating slightly in the dialogue. The actors improvised very well during these moments and the audience felt more involved in the story as a result of this.

Stephenson’s portrayal of Dimetrius is very cocky and self-assured which makes it very easy for the audience to take Lysander’s side, but come around to liking him when things flip around. The relationship between him and Garvey is very good, with her desperation to gain his love being palpable and her character’s precociousness very funny. The physical comedy created by these two alongside Silverman and Jeffery is brilliant and adds to the bedlam in the play as a whole.

The Mechanicals have excellent physicality and facial expression and had the audience laughing out loud almost all of the time they were onstage. Andrew’s Bottom is hilarious and interacts with the audience very well. Nathan Pace playing Francis Flute has excellent comic timing and a lovely presence.

Arends’ performance is loud, proud and hugely entertaining. Managing to maintain a sense of showmanship throughout, even down to announcing the fire exits to the audience in character, he embodies the sense of fun that the cast have obviously had with this production.

Woolton Drama Group’s A Midsummer’s Night’s Dream is everything you could want in the classic story of confusion and mayhem in the romance of the magical forest and is truly a credit to the amateur drama scene.