Still no Idea, starring Lisa Hammond and Rachael Spence, and directed by Lee Simpson, tells the story of two actors trying to write their own show with the help of the Great British Public. Making a pact to stick to the story they are given no matter what, they start improvising the various ideas they are given but soon find out that creating a show that includes both of them isn’t as easy as it seems.

Still no Idea is presented in a relaxed environment and the audience are able to respond to the show in any way they are and can leave and re-enter the auditorium if they need to. This ensures that the show is a safe space for everyone. 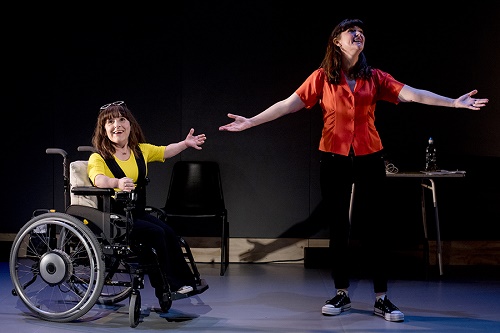 Working through the ideas offered by the public means that various stories, comical and tragic, dramatic and romantic, are performed, and there’s even a particularly entertaining Cockney sing-song thrown in for good measure. Lisa and Rachael are soon arguing about which of the ideas are the best.

Some of the sketches feature excellent mime sequences and the fun romantic story and creepy haunted house story are particularly memorable, although both feature the core issue of contention; that Lisa, being a wheelchair user, is pushed into the background by the public writing the stories for them.

As we watch Rachael being given various and interesting storylines, while Lisa sits watching on the sidelines, the sad reality of the representation of disabled people becomes very clear. The show explores the place of disabled people in theatre, on television and in film, and in society, in a brutally honest and refreshing way. The stark difference between what people say and what they do is laid bare.

Despite the poignant elements of the play, this is a funny show, which really comes into its own towards the end. Both Hammond and Spence are very talented actors and the show will change the way you think about the world and the people in it.

Still no Idea is being performed on tour until 12th November. Tickets are available here http://www.bunnyproductions.co.uk/still-no-idea