Just an Ordinary Lawyer is a one-man show written and performed by Tayo Aluko, under the direction of Amanda Huxtable, which tells the story of the life of Tunji Sowande, an ordinary Nigerian lawyer living in Britain during the fifties and sixties and his encounters with politics and institutional racism.

The story begins with our narrator living in Lagos, Nigeria, with his wife and their two young children. Disenchanted with life he makes the decision to move to Britain and train as a lawyer. The fact that he will be able to watch his beloved cricket in some of the greatest grounds in the world is an added bonus. After saying goodbye to his children and moving to Britain he passes the bar exam first time and has high hopes for the future. Unfortunately, he soon finds out that obtaining his dream job may be harder than he thought possible. 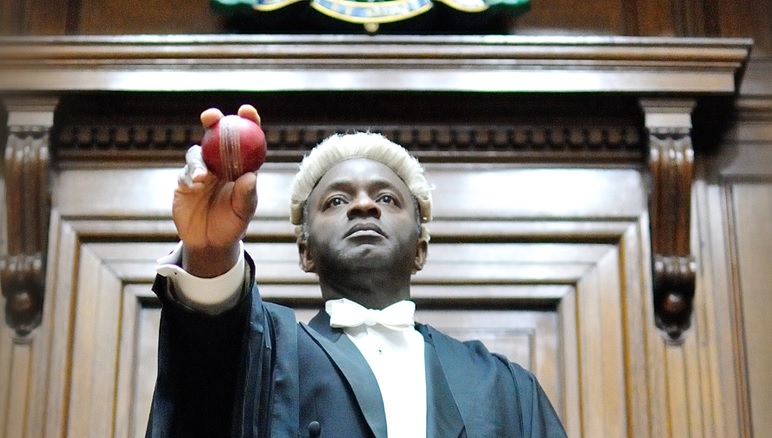 The set is very simple, consisting of a couple of chairs, a desk laden with books and a clothes rail holding a small number of garments and a cricket bat, all of which are cleverly utilised by Aluko to represent the various places he goes to while telling his story. His performance features some very high quality mime which creates various settings and other characters featured in the story.

Aluko sings a number of songs throughout the production, ably accompanied by David Dear on piano, which enrich the performance and add a depth to the stories Aluko is relating. Aluko’s rich baritone is hypnotic and these songs are one of the high points of this enchanting play.

Sport, particularly cricket, plays a key part in the show. Used as both a symbol of British colonialism and as something which brings people together, the use of sport is interesting and effective. Exploring cultural differences between Nigeria and Britain, the play raises some interesting points and features some very strong and shocking language which brings to the fore what it is to be on the receiving end of racism.

The story of cricketer Basil D'Oliveira in particular is a big part of the story told in the play. Other elements of history including the assassinations of Bobby Kennedy and Martin Luther King Jr, race riots and political unrest. This true history adds a sense of realism to the play and enhances the quality of the story.

The play is enriched with the multiple levels of personality of Aluko’s character. Although an excellent lawyer, his relationship with his children suffers greatly by his move and there is a lot of guilt about his role as a father and a son. He is not a perfect man and his flaws make him more realistic and rounded and the play is far more interesting as a result of this.

Combining the tragedy of living within a racist culture with delightfully witty comedy, Aluko’s performance is charming and captivating. A lovely story, with elements of sadness and regret, Just an Ordinary Lawyer is a captivating walk down memory lane which makes some very interesting points about institutional racism and how it has developed and changed over the years.

You can find out more about Tayo Aluko and his upcoming work on his website https://www.tayoalukoandfriends.com/