“Sex Education” graces the at Unity Theatre stage tonight as part of ‘Homotopia’, the UKs longest running LGBTQ+ Arts and Culture festival. Harry Clayton-Wright shares his own personal story in an entirely honest and unimaginable style. Having had no idea what this show was really about, I can’t deny that I was shocked at the graphic sexual videos that opened the show however it was definitely a sign of things to come as Clayton-Wright brings explicit and intense to a whole new level. 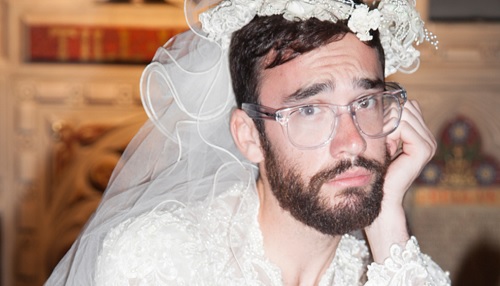 Clayton-Wright is dressed in a beautiful wedding dress as he begins to explore his own upbringing through a pre-recorded interview with his mother. The bond between mother and son is undeniable and it is an honour to get to know these two very compassionate and caring individuals. It is clear that Harry had unwavering support from his mother throughout his childhood and despite their differences, it was moving to hear the non-judgmental, unconditional love between these two.

Clayton-Wright bears all in every sense as he shares intimate personal experiences, both negative and positive. The show takes many twists with themes of vulnerability, security, loneliness and positive sexuality explored. The audience participation took me by surprise but added another layer to this already unique performance.

“Sex Education” is comedic, crazy and X-rated. Clayton-Wright is very diverse in his writing and performance as he brings us comedy, lip-syncing, chilling realities and real life cucumber sandwiches, both made and served during the show! There is a method to the madness though and a prevailing message of self-love and LGBT+ inclusive sex education is apparent as Clayton-Wright stresses this has the potential to prevent suicide in the future.

The sheer amount of explicit sexual footage is unnecessary but it will get you noticed. This is not one for the faint hearted but I’m not sure that the aim was to make the audience sit back and relax. This piece is completely unforgettable and definitely makes a statement. There is real pleasure is in the bravery of Clayton-Wright as an artist and as an individual. He is talented and sincere behind all the explicit bravado and someone who will be successful in the world of theatre. Just don’t forget to read the small print and the WARNINGS before you go to his next show!